German police arrested a Turkish national on suspicion that he ferried money and equipment for an Afghanistan-based group widely seen as a successor to al Qaeda. 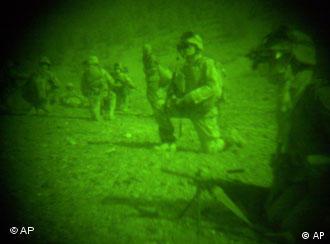 The alleged terrorist was passing on a night-vision device

The suspect, Burhan Y, aged 21, was picked up Wednesday, Oct. 22, at his home near Frankfurt, said the prosecutor-general's office in Karlsruhe.

He is the younger brother of a man arrested last year for allegedly plotting bomb attacks in Germany on behalf of the Islamic Jihad Union, or IJU.

The arrested man allegedly met with an IJU courier to pass over a night-vision device, a digital camera and a pair of binoculars needed by the IJU at its bases in the wilds along the Pakistan-Afghan border.

The prosecutors said the arrested man used a money remittance service to wire 1,100 euros ($1,386) to an IJU intermediary. A federal magistrate remanded the man into investigative custody.

IJU has been described as a new group taking over the role of al-Qaeda, the group led by Osama bin Laden which used hijacked planes to attack New York and Washington in 2001.

The elder brother, Adem Y, was arrested on Sept. 4, 2007, along with German nationals Fritz Gelowicz and Daniel Schneider, after police observed them allegedly buying bomb-making chemicals.

The trio are to face trial for allegedly forming a terrorist group to attack US soldiers on German soil.