The North Rhine-Westphalia premier — who's seen as a potential successor to Chancellor Angela Merkel — has been visiting refugee camps in Greece. But after visiting Moria camp on Lesbos, Laschet had to make a swift exit. 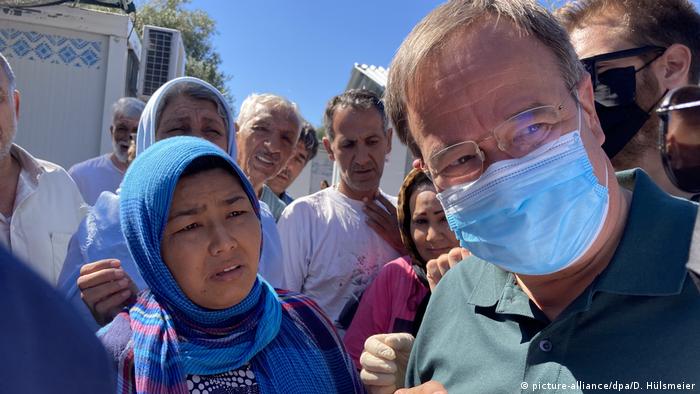 Laschet, who is the premier of Germany's most populous state, North Rhine-Westphalia, had originally planned to visit the slum-like area of the overcrowded camp on the Greek island of Lesbos, after visiting the facility's official container accommodation.

However, he heeded security advice telling him not to go to that part of the island after migrants from Afghanistan and Africa crowded around and started shouting "free Moria."

A strong security operation formed a protective shield between Laschet and the chanting protesters.

A security official said the frustrated refugees had mistaken him for the "prime minister of Germany," according to sources from the delegation.

Chancellor Angela Merkel has already announced she would be standing down next year, with Laschet a leading contender to replace her as candidate to lead the conservative CDU party at the polls.

After his brief trip to Moria, Laschet viewed the Kara Tepe camp, where 1,300 migrants are hosted in less chaotic conditions.

Nevertheless, Laschet's visit prompted him to remark that he had heard "the cry of the desperate" at the camps.

"The entire European Union must now wake up," he added, calling for a common and long-term solution to the crisis.

Roughly 20,000 people are currently stranded in extremely adverse conditions on Greece's easternmost islands, in places such as the Moria refugee camp on Lesbos.

Children left behind in camps