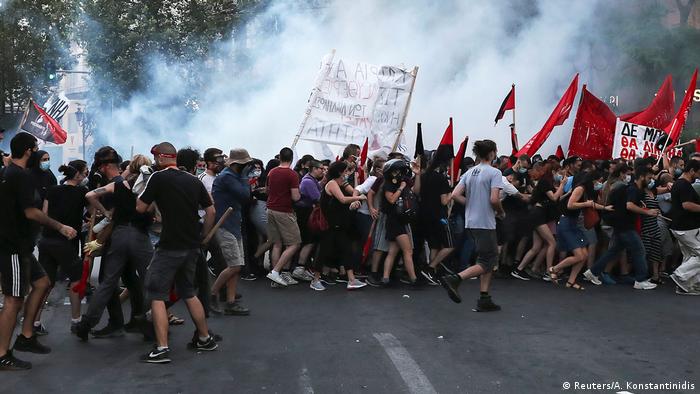 Violence erupted in Athens late Thursday amid a mass demonstration against a law passed by parliament to curb public protests. The clashes between protesters and authorities left at least six police officers injured.

Some 10,000 protesters had gathered in the center of Athens to oppose legislation put forward by the center-right government.

A group of demonstrators who broke off from the main group threw petrol bombs at police, who responded with teargas. Police said they had arrested nine people and taken in 15 others for questioning.

Prime Minister Kyriakos Mitsotakis said the new law was necessary to deal with "dozens of small protests" that have sparked in city centers across the country.

"There are frequent cases where these events... descend into vandalism," Mitsotakis told lawmakers on Thursday prior to the vote. "There must be rules so that (protests) do not impede citizens' movement and work, and the life of an entire city," he added.

"One's freedom to protest is as valuable as another person's freedom to reach the hospital, his work, his home," Mitsotakis said.

The legislation, which was approved by 187 of the 300 members of parliament, places restrictions on demonstrations or complete bans if protests are deemed to threaten public safety

It also holds organizers accountable for damage and injury caused by protesters.

The new law has been widely condemned by several groups in Greek society, including opposition parties, the NGO Amnesty International, the Athens Bar Association, unionists and the Greek parliament's own legislative review committee.

The leftist Syriza party, the main opposition party in parliament, attacked the bill as "paternalistic" and "fascist-like." Syriza and other smaller parties have accused the government of seeking to muzzle criticism ahead of a forecasted deep recession, which was exacerbated by a long coronavirus lockdown.

Glezos, a prominent Greek whose act of defiance against Nazi occupation during World War Two was a rallying cry for the country's resistance movement, died on Monday, authorities said. (30.03.2020)