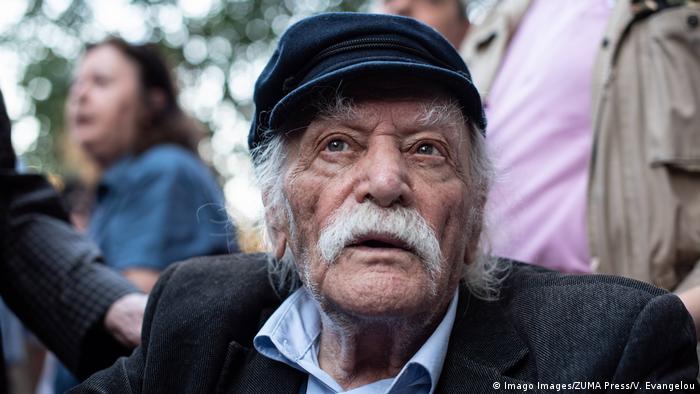 Glezos had been placed in emergency care in November with respiratory problems, according to news reports.

An icon of the Resistance

On May 30, 1941, during Nazi Germany's occupation of Greece, the 18-year-old Glezos and his 19-year-old friend Apostolos Santas, a law student, climbed onto the Acropolis in the middle of the night and tore down the Nazi flag, replacing it with a Greek flag. The pair's act of defiance in removing the swastika from the Athenian Acropolis, considered by many to be a symbolic birthplace of Western democracy, made him one of the country's most revered figures.

The Nazis, who did not discover the identity of the young activists until 1942, condemned in absentia the perpetrators to death. Glezos was ultimately imprisoned and tortured, but escaped execution. Santas died in 2011.

"Hitler had said in a speech that 'Europe is free.' We wanted to show him that the fight was just beginning," Glezos told AFP news agency in a 2011 interview, recalling how he and Santas managed to steal the flag. After the war, "Greece conquered its freedom, but not its independence," he said.

His activism and staunch defense of democracy landed him in jail numerous times during the Greek Civil War and later the Cold War.

During Greece's economic crisis that began in the late 2000s, Glezos opposed his government's austerity measures and campaigned to force Germany to repay money it was forcibly "loaned" by Greece during the war.

Read more: Will Germany pay back the Nazis' stolen 'loan' from Greek bank? 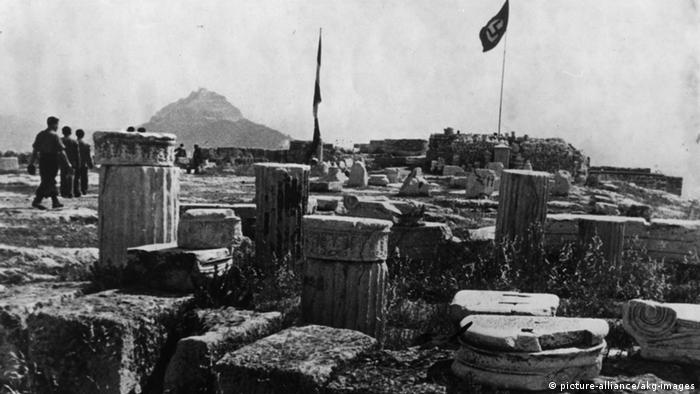 The Nazis occupied mainland Greece from 1941 until 1944

Prominent voice of the anti-austerity movement

With his white mane of hair and bushy moustache, Glezos remained a recognizable fixture in leftist politics. Already in his 80s, he braved police tear gas at protest rallies against crippling austerity cuts imposed in exchange for international bailouts that kept the Greek economy afloat between 2010 and 2015.

In 2014, the 91-year-old statesman was elected to the European Parliament with the leftist Syriza party, becoming the body's oldest deputy. He resigned from the post the next year.

Upon being asked what had kept him at the forefront of politics for so long, Glezos told Reuters news agency in 2012 that it was the memories of dead comrades. "Before every battle, every protest, we told each other: 'If you live, don't forget me'. I am paying a debt to those I lost during those difficult years. My only regret is that I haven't done more."

Outpouring of respect from across party lines

Though Glezos remained staunchly leftist throughout his life, prominent figures from the right, including Prime Minister Kyriakos Mitsotakis, immediately honored his memory. "The death of Manolis Glezos leaves the Greeks poorer. But his life has left Greece richer, because his example … is a guiding light that arms us with strength so that we may remain united through difficult times like the present," Mitsotakis said on Monday.

"Together with every Greek, I bow my head in respect at the memory of Manolis Glezos," added Mitsotakis, who is aligned with the center-right New Democracy party. The prime minister described Glezos as a "symbol of our nation's freedom."

Ioannis Lagos, a founding member of the Greek neo-Nazi party Golden Dawn, is due to serve a 13-year jail sentence. As a member of the EU Parliament, he had enjoyed immunity until late April.