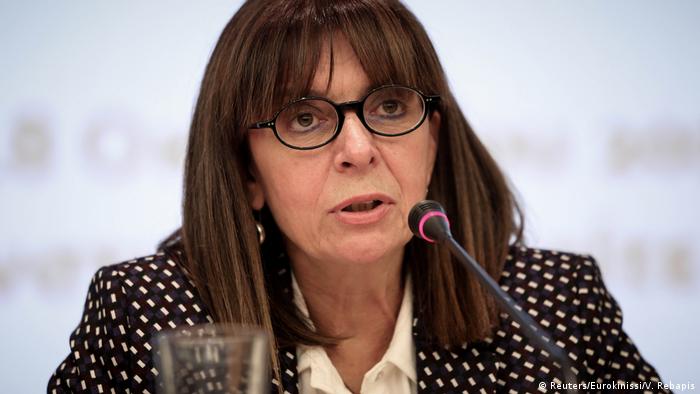 The head of Greece's top administrative court, Katerina Sakellaropoulou, was elected the new head of state following a historic parliamentary vote on Wednesday.

A cross-party majority of Greek lawmakers endorsed Sakellaropoulou as the successor of the current president, Prokopis Pavlopoulos, whose term is set to expire in March. The 63-year-old Sakellaropoulou will become the first woman in the history of Greece to hold the top office.

While the president's authority is limited by the constitution, the officeholder is the commander-in-chief of the country's armed forces and is often consulted on important affairs in an advisory capacity.

Greece opens up to 'the future'

Greek Prime Minister Kyriakos Mitsotakis suggested Sakellaropoulou, a well-known progressive judge, for the post which she is expected to hold for the next five years.

"The time has come for Greece to open up to the future," he said last week.

The move was backed by Mitsotakis' conservative New Democracy party, but also by the opposition Syriza party led by former Prime Minister Alexis Tsipras, who praised Sakellaropoulou as an "exceptional judge" and a defender of human rights.

The Thessaloniki-born Sakellaropoulou is a daughter of a Supreme Court judge. She studied law in Athens and completed her post-graduate studies at Sorbonne in Paris. She is known for her progressive attitude on the issues such as discrimination and climate change.

Balance instead of confrontation

Despite her decades-long career in the top tier of Greek judiciary, Sakellaropoulou is considered a political outsider and has no party alliances.

"And this exact attitude is especially important for the presidential office," the Athens-based expert said.

Jannis Papadimitriou from DW Greek has contributed to this report.