Germany and EU hit back at Donald Trump′s trade war threat | Germany | News and in-depth reporting from Berlin and beyond | DW | 06.03.2018

German and EU politicians are threatening tit-for-tat import tariffs to retaliate against the US president's plan to impose a 25-percent duty on EU steel. The EU is aiming to tax Harley Davidsons and bourbon whisky. 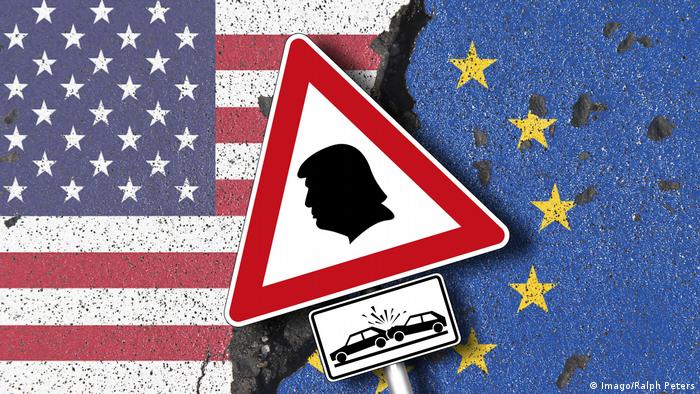 Germany's political leadership has reacted sharply to President Donald Trump's tweets threatening "a tax" on European cars that "freely pour into the US," and a declaration, made last Thursday before industry executives, that the US would impose a 25-percent tariff on steel imports and a 10-percent tariff on aluminum.

The EU has said it is planning to forge a coalition of countries to agree a unified reaction to Trump's move. According to the European news portal Euractiv, European Commission officials are in contact with other affected countries, including Canada, Brazil, South Korea, Japan, Australia and Turkey.

But the EU is reportedly also prepared to react alone, and is preparing to approve a package of measures on Wednesday that will seek, among other things, to settle the dispute with the US and agree upon retaliatory measures. 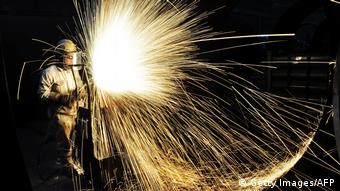 Trump feels the US is threatened by German steel

Part of this package was leaked to news outlet Bloomberg on Monday night, and showed that the EU has prepared a list of US imports that would be ripe for a 25-percent tariff: Levi's jeans, Harley Davidson motorcycles, orange juice and bourbon whisky, as well as other consumer, agricultural, and steel products.

The tariffs, according to Bloomberg, would be worth €2.8 billion ($3.5 billion), to offset the US measures.

The German government also promptly ramped up its rhetoric in reaction to Trump. "If blanket US import duties on aluminum and steel are imposed, it will lead to ruptures in world trade," German Economy Minister Brigitte Zypries said in a statement. "Should Trump follow his words with actions, Europe will reply proportionately. It is not credible that European or German steel imports should endanger the national security of the US."

Zypries went on to question Trump's consistency: "Someone who talks as much about fair trade as President Trump does should not reach for such unfair methods." Meanwhile, European Commission President Jean-Claude Juncker struck an even blunter tone last week, describing Trump's announcement as "stupid." But "we can also do stupid," he said last Friday.

Germany's representatives in the EU joined in the chorus condemning Trump's policy. "Mr. Trump isn't imposing penalty duties, he's isolating," said Bernd Lange, trade policy spokesman for the Social Democrats in the European Parliament and chairman of its trade committee. "We haven't done anything wrong. We stick to the rules of the International Trade Organization, and that's why we have to implement countermeasures."

"At the end of the day, his industry will only suffer," said Godelieve Quisthoudt-Rowohl, the Christian Democratic Union's (CDU) trade policy spokeswoman in Europe. She pointed out that the George W. Bush administration had once announced similar tariffs, and US industry had also suffered in the medium-term.

"It becomes less innovative, because it is limited to one market, and loses more and more contact with the rest of the world," she told DW. "The other point is that there aren't necessarily massive capacity reserves in the US, and it's not at all sure that even if the steel industry grew, you'd necessarily find workers for it. Something is being set in motion when you don't know how it will end."

Meanwhile Joachim Pfeiffer, CDU economic policy spokesman in the German parliament, advised Europe not to "play along" with the reciprocal construction of trade barriers across the Atlantic. "I would be reserved about threatening retaliatory measures from the EU side," he told DW in an emailed statement. "It makes sense for the EU to exhaust all possibilities at the World Trade Organization (WTO), and if necessary to sue the US there."

The German Economy Ministry said the EU's trade ministers had already met in Sofia, Bulgaria, last week to discuss potential US measures and the EU's response. "Further discussions are currently running," the statement said. "Minister Zypries warned against ruptures in world trade through a threatened trade conflict — which no one wants — and hopes the US president will reconsider."

"One-sided protectionist measures hurt everyone, including the USA itself — which US industry has already publicly warned their president about," the statement added.

Germany's opposition Green party said the EU needed to take some of the blame, however. While arguing that the "trade war" that Trump was triggering "would only bring losers," the Greens also said that "sticking to the dogma of free trade would be no help either."

"It's not fair competition when not all companies are playing by the same rules," said Green parliamentary leader Anton Hofreiter and trade policy spokeswoman Katharina Dröge in a joint statement. "We want a fair exchange, not EU first. That includes, among other things, rules against unfair tax competition and global regulations for fair competition. That's different from Trump's protectionism."

The neo-liberal Free Democratic Party (FDP) also criticized the German government reaction, even as it criticized Trump — but from the opposite political direction. Writing in Focus magazine last week, FDP parliamentary leader Alexander Graf Lambsdorff said the German government needed to finally commit to the free trade agreement with Canada known as CETA. "In times when protectionism, populism, and nationalism are becoming acceptable again, we need such agreements," he wrote. "No other country is as dependent on open markets as the world export champion Germany."

The European Union's foreign policy chief told DW that the EU has already cut its Russian gas imports by half. The EU is accused of funding Vladimir Putin's war machine while consumers face a cost-of-living crisis.