Germany and China to boost cooperation in energy technology sector | Business| Economy and finance news from a German perspective | DW | 22.04.2014

Germany and China to boost cooperation in energy technology sector

In China for a two-day visit, Germany's economy and energy minister has said firms back home would stand to benefit from Beijing's planned shift to cleaner energy. But some obstacles had yet to be overcome. 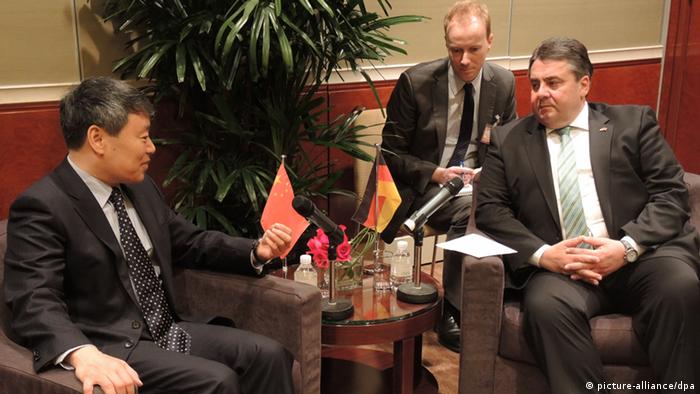 German Economy and Energy Minister Sigmar Gabriel( right in the picture) said at a forum in Beijing on Tuesday the Chinese leadership had realized the country's growth model of the past had come at a huge cost for the environment. He said there was agreement much greater energy efficiency and a big reduction in harmful greenhouse gas emissions was urgently required in the face of poisoned rivers and massive air pollution.

"That's why I believe that it will be absolutely critical for the Chinese economy to invest heavily in sustainable and environmentally-friendly growth," Gabriel said in his address to policy-makers and energy experts.

The head of China's National Development and Reform Commission (NDRC), Xu Shaoshi (left in the picture), said he'd welcome a much closer cooperation with German companies in the field of environmental protection and the energy sector, arguing that Germany was able to offer top-notch technology as the country was in the middle of an unparalleled energy transition.

Fair competition a must

"The combination of German innovative clout and Chinese speed in implementing economic measures could go a long way towards stetting a global example of how best to reduce harmful emissions," Xu maintained.

Sigmar Gabriel for his part noted that there were still a couple of obstacles standing in the way of a more open economic cooperation. He said current regulations to protect patents and intellectual property at large were unsatisfactory. In addition, foreign companies were still being put at a disadvantage when it came to public tenders, the minister criticized.