In an open letter sent to the German government, over 20 organizations criticized plans to open so-called "anchor centers" for asylum-seekers. They said the centers would infringe on the rights of children and families. 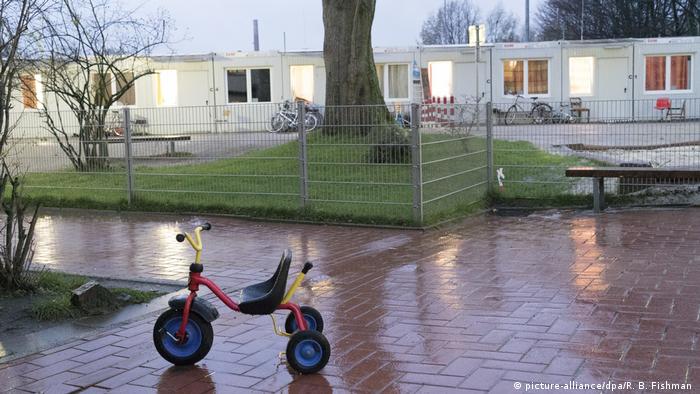 Family and refugee aid organizations urged the German government in an open letter on Saturday to take the needs of children and families into consideration in their plans for asylum-seeker "anchor centers," arguing that they're currently unsuitable and possibly unsafe.

German Interior Minister Horst Seehofer has defended plans for the centers, saying they are would help streamline asylum procedures and increase deportations by keeping asylum-seekers in the centers for up to 18 months.

What are 'anchor centers?' These centers would be used to house asylum-seekers — including families — from their arrival in Germany to their deportation or voluntary return to their home country should their applications be rejected.

Unaccompanied minors would be taken under the care of Germany's youth services, but if the age of an asylum-seeker is in question, they would remain in the "anchor center."

The government says it wants to limit the time an asylum-seeker would stay in the center at 18 months. Families with underage children would be capped off at six months and then be moved into a local council.

Where would they be located? Seehofer plans on setting up six pilot centers starting in September. According to information from news agency dpa, only two centers located in Seehofer's southeastern home state of Bavaria and the southwestern state of Saarland are ready.

Criticism of Seehofer's 'masterplan:' It's still unclear exactly how the centers will function, how free the asylum-seekers will be to move around as well as who will run the centers. The federal police have pushed back against Seehofer's plans to put them in charge of the centers, with one Police Union (GdP) official comparing them to prisons. Local councils have also criticized that housing people in such centers can lead to violence and hinders migrants from integrating in Germany.

Each evening at 1830 UTC, DW editors send out a selection of the day's hard news and quality feature journalism. You can sign up to receive it directly here.

The German Cabinet has approved legislation allowing refugees with so-called "subsidiary" status to bring their direct relatives to Germany. The finer details have exposed deep divisions within the governing coalition. (09.05.2018)