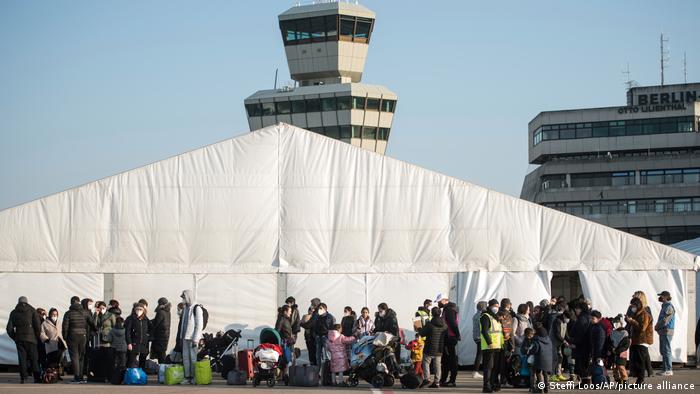 Refugees from Ukraine at Tegel airport in Berlin

Leaders of Germany's federal states agreed Thursday on a cost-sharing mechanism to support and integrate refugees fleeing the war in Ukraine.

After hours of negotiations between Chancellor Olaf Scholz and state premiers, it was agreed that Ukrainian refugees in Germany should receive a similar level of support as the Hartz IV welfare program provides.

What support has been agreed?

Chancellor Scholz said that the federal government would provide €2 billion ($2.17 billion) in support of Germany's states  for accommodating and integrating Ukrainian refugees.

An average single recipient of Hartz VI receives around €400 per month.

Refugees from Ukraine will be able to receive basic welfare benefits in Germany as of June 1, Scholz said.

The inclusion in Germany's basic social security system will make it easier for Ukrainian refugees to integrate and stay in Germany, Scholz added.

By legally including Ukrainian refugees in Germany's social security system, it will allow them access to more resources as "recognized asylum seekers."

"I Want My Life Back!" - Tanya’s escape from war

"The agreement is a good basis for our country to stand together in the long term," Scholz said.

How many Ukrainian refugees are in Germany?

Germany has registered around 316,000 Ukrainian refugees so far, according to federal police.

German states, including Berlin and Brandenburg, had asked the federal government to provide support, arguing states alone should not have to bear the financial burden of supporting the large number of refugees fleeing the war.

"It will enable people to arrive well here in Germany. Potential can be used, talents can be fostered, and children and young people can also have a perspective here," said Berlin Mayor Franziska Giffey after the decision.

Berlin estimates that up to 60,000 Ukrainian refugees are currently residing in the German capital.

Scholz said it is currently "difficult to estimate" how the refugee situation will unfold in the months ahead as the war in Ukraine continues.

A Ukrainian refugee builds back business in Berlin