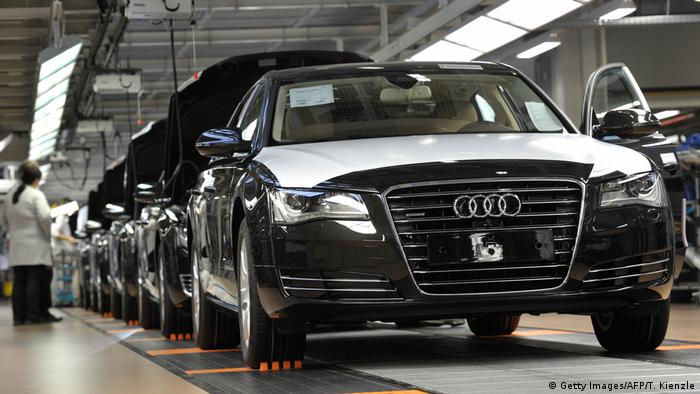 Dobrindt announced Thursday that the luxury carmaker had been told to recall its A8 and A7 models fitted with V6 and V8 diesel motors and sold between 2009 and 2013 in Europe.

The minister said he had spoken with chief executive of Audi's parent company Volkswagen, Matthias Müller, earlier on Thursday.

In March, Audi's chief executive Rupert Stadler had said that all aspects of the company's operations were being reviewed as a result of the affair.

Germany's tabloid newspaper Bild said Müller had been "summoned" to the transport ministry in Berlin.

The Volkswagen subsidiary was under pressure to present a concept for the refitting of affected vehicles by 12 June to reduce pollutants, Bild said.

The tabloid said half of the Audis to be recalled were owned by customers in Germany. The rest were customers elsewhere in Europe.

Dobrindt of the Bavarian Christian Social Union (CSU), a party long allied with Chancellor Angela Merkel's Christian Democrats (CDU), claimed that only recently had it become evident that the affected Audi vehicles had been fitted with an "unlawful" switch-off system.

Simulating straight-ahead driving, the device minimized pollutants, but if the steering wheel was turned more than 15 degrees, the nitrogen oxide level doubled.

In March police searched Audi's headquarters in Ingolstadt in Bavaria.

Audi subsequently failed to get courts to reverse parallel seizures by prosecutors of documents collated by a Volkswagen-appointed law firm.

The "Dieselgate" pollution scandal became public in 2015 when Volkswagen admitted that it had installed software devices in 11 million diesel-engine cars worldwide.

Read more:Merkel testifies that she knew nothing of VW 'dieselgate' in advance

Settlement proceedings are already under way in the United States. VW has already set aside more than 22 billion euros in provisions to cover fines and compensation.

Last Monday, the European Union overcame initial objections from Germany and began a reform of the system used for approval of vehicles in Europe.

The amended rules would reduce the power of national authorities and empower the European Commission to test vehicles and impose fines.

Every country would be required to run spot checks under real driving conditions.

Volkswagen CEO Matthias Müller is being probed by investigators on market manipulation charges, prosecutors in Stuttgart have confirmed. It's the latest fallout from the firm's dieselgate scandal. (17.05.2017)