Merkel testifies that she knew nothing of VW 'Dieselgate' in advance

German Chancellor Angela Merkel has told a parliamentary inquiry that she only learned of Volkswagen's diesel emissions scandal when it became public knowledge. She rejected accusations of having been too lax on VW. 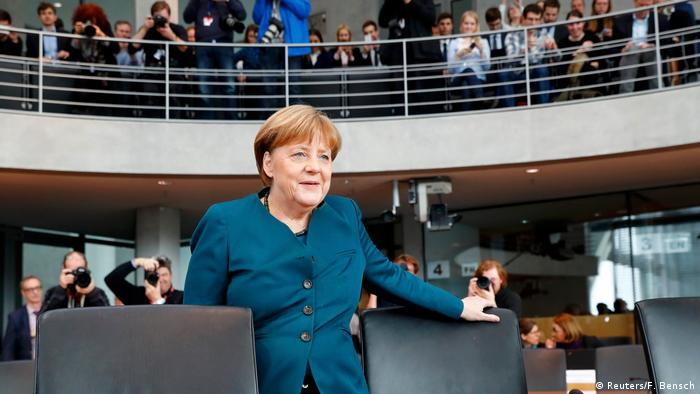 Presented as the committee's final witness, Chancellor Angela Merkel stressed that she had found out about the accusations against Volkswagen on September 19, 2015, and was then informed by Transport Minister Alexander Dobrindt on September 21. She later spoke by telephone to VW's then Chief Executive Martin Winterkorn, "probably on September 22."

When asked about what she found out from Winterkorn, Merkel answered: "Nothing that I didn't already know based on the information from the transport minister [Alexander Dobrindt] and the media."

The German parliament formed the committee in 2016 in order to determine when Merkel and her government had found out that VW had been rigging its diesel engines to cheat on emissions tests. Winterkorn is accused of having known about the affair before the scandal broke in the media.

Merkel explained that she had instructed Dobrindt to lead the national probe into the scandal, which was triggered once VW had admitted to installing the so-called "defeat devices" in more than 11 million vehicles around the world. The devices effectively tricked the tests, by recognizing that the car was undergoing an emissions test and altering its performance to improve its results but deliver better readings than real-life driving would.

Germany's economy has been hard hit by the scandal at Volkswagen, but will not be negatively affected in the long term. That is the view of several leading figures, including Chancellor Angela Merkel. (04.10.2015)

Opposition parties had wanted the parliamentary committee to also investigate the government's response to the scandal, claiming Berlin had been too lax in its treatment of the car industry. Merkel has rejected suggestions of failure on the part of her government in the handling of the scandal.

Merkel, who used to be Germany's environmental minister before becoming chancellor, called it "unfortunate" that Volkswagen had misled US authorities. She stressed that she had pressed for new EU environmental standards and targets for engine technologies, but added that such new regulations should not impede cars from being produced in Germany.

"The regrettable thing is that VW representatives did not tell the truth to the American environmental agency," she said. "The Americans have their own standards and they weren't met (and) when questioned denied that they weren't being met."

When asked why the scandal had not been discovered in Germany but in the US, Merkel said: "I don't have any explanation for that."