A man accused of an anti-Semitic attack on a Jewish professor in the western city of Bonn has been sentenced to jail time. The victim in the case has said his treatment by police was the worst part of the assault. 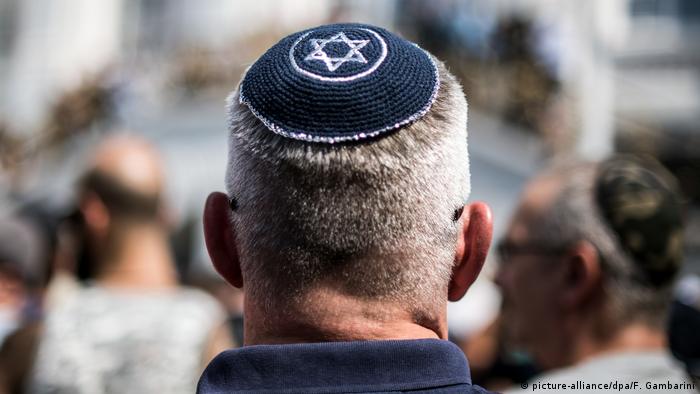 A German man of Palestinian heritage, accused of having struck the yarmulke from the head of a Jewish professor from the US in an attack in Bonn, has been sentenced to 4 1/2 years in prison — though part of that term had to do with a conviction for robbery and another with a charge of abusive language in a separate case.

"I'm very ashamed of it," the 21-year-old accused said Monday of his actions in assaulting Yitzhak Melamed in 2018. For the attack, he was charged with bodily harm and incitement of hatred with an anti-Semitic motive.

The presiding judge in the Bonn court, Susanne Grunert, said that by hitting the yarmulke off Melamed's head several times, he had endangered public order.

But Melamed himself, who was not present in court, said through his lawyer that the actions "by a gang of four Bonn police officers" who manhandled him after the attack because they mistook him for the assailant had been much worse than the assault itself.

The interior minister of North Rhine-Westphalia, where Bonn is situated, apologized for the 2018 incident, as did the head of Bonn police. An earlier investigation by the public prosecutor found, however, that there was no basis for legal action against the officers involved.

"Jewish existence — and this is crazy — is again precarious in Germany," he said. There was a rise of 10% in anti-Semitic crimes in the country between 2017 and 2018.

Last Wednesday, a gunman tried and failed to storm a synagogue in the city of Halle, with the suspect admitting later to having anti-Semitic motives. Two people died and another two were injured during a rampage following the failed attempt.

The anti-Semitic attacker allegedly acted alone, but he was part of a digital community. Via the internet, hatred and agitation are spread across borders. DW takes a look at the digital world of right-wing extremism. (11.10.2019)