German police on Friday said three men were being held in custody as part of an international investigation into the illegal online operation named "Wall Street Market," which was shut down on Thursday.

State prosecutors believe that the platform was "at least" the second-largest illegal marketplace operating on the darknet, and was mainly used to sell cocaine, heroin, cannabis and amphetamines, as well as hacked data, forged documents and malware. It had been up and running for two years.

The three suspects, aged 22 to 31, were arrested over a week ago in the states of Hesse, North Rhine-Westphalia and Baden-Württemberg, Germany's Federal Criminal Police (BKA) said in a statement. The police investigation involved security services from the US and Netherlands, as well as the European Union's policing authority, Europol, and Germany's ZIT internet crime agency.

At a press conference in Wiesbaden on Friday, which included representatives of the US attorney's office, the FBI and Europol, BKA President Holger Münch described the case as "extraordinary." 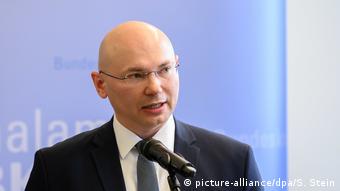 Georg Ungefuk, spokesman for the Frankfurt chief prosecutor's office and for the ZIT, said, "This illegal trade platform was only accessible via the [encrypted] Tor network on the so-called darknet, and it was based on a worldwide exchange of criminal goods."

He explained that since it is impossible to ascertain initially where such platforms are run from, the investigation had to be international, with different investigators in different countries picking up "puzzle pieces" of the online infrastructure.

While the common language of the illegal online operation was English, German was also an option — providing an early clue to investigators.

Ungefuk said the three German nationals were suspected of operating the illegal online platform jointly. He added that police had seized the "server infrastructure" of the marketplace, which was located in Germany, the Netherlands, and Romania.

Some 63,000 items were on sale on the platform, which had over 1 million customer accounts and 5,400 seller accounts, Ungefuk said. The cryptocurrencies Bitcoin and Monero were used on the platform, with the three suspects earning commissions of between 2% and 6% on the sales.

Ungefuk also said the three suspects had apparently tried to scam their customers by putting the platform on "maintenance mode" and then transferring money on its accounts onto their own personal accounts, known as an "exit scam." In the time leading up to the arrests, the investigators had noticed that the administrative operation of the market was being wound down.

Officials have been investigating all three suspects since March this year. The suspects had apparently been making preparations to go into hiding when the authorities swooped in late April.

In the raids, police seized more than €550,000 ($615,000) in cash, as well as six-figure sums of stored cryptocurrency and expensive cars. Ungefuk, who said the suspects faced jail terms of between one and 15 years, said profits "in the millions" had been made on the Wall Street Market, though databases would have to be examined to determine exactly how much.

Prosecution in the US

Ryan White, the US federal prosecutor who heads cybercrime prosecutions in Los Angeles, also used the press conference to announce the filing of criminal charges against the three German suspects, though Ungefuk clarified that if they are successfully prosecuted in Germany, they could not be tried for the same crimes in the US.

"I am very appreciative of our German hosts, and for all the international law enforcement partners represented here today," White said. "The charges filed in Germany and the United States will significantly disrupt the illegal sale of goods on the Darknet."

White added that charges had been filed against "two major drug traffickers" in Los Angeles who had used Wall Street Market.

Ungefuk said that similar "secondary investigations" were ongoing in Germany. "It should be no surprise that we are very interested in pursuing additional actions based on this case, so stay tuned," White added later in response to a reporter's question.

Sales of weapons and images of child abuse were expressly forbidden on the platform, according to investigators.

A German court has found a 31-year-old man guilty of operating a platform that allowed a gunman to purchase his murder weapon. The presiding judge said the crime could not have happened without the platform. (19.12.2018)