The major archaeological find left researchers and German church officials feeling "like Indiana Jones." But with the rush of fresh air threatening to alter the remains, the clock is ticking to identify the body inside. 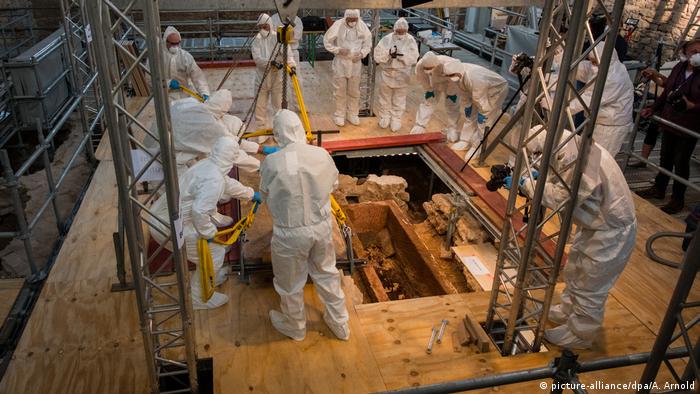 After months of preparations, an international team of researchers were able to open a 1,000-year-old sarcophagus at the St. Johannis (St. John's) church in the German city of Mainz on Tuesday.

Using a pulley system, the team lifted the 700 kilogram (1,540 pound) lid off the grave and took a peek inside at remains that likely haven't been seen in a millennium.

"We all got to feel a little bit like Indiana Jones," Mainz Dean Andreas Klodt said at a press conference. 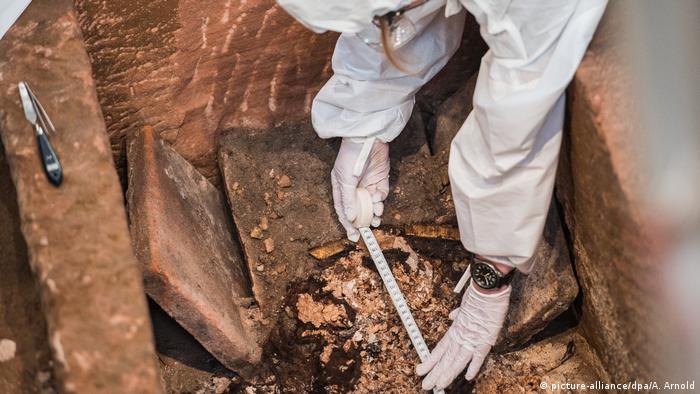 Researchers found male human remains, although it is still uncertain who is buried inside.

The body was likely covered in quicklime shortly before the sarcophagus lid was put on in order to speed up the decay of the body — but that also makes identifying the remains difficult.

"Not even teeth could be found," Swiss archaeologist Guido Faccani said.

Historians and church officials alike hope that the remains in the grave can help solve some of the historic mysteries surrounding the St. Johannis church, which is one of the oldest in the city.

The body is believed to belong to Erkanbald, the Archbishop of Mainz who died in 1021. Should this be true, it would make the St. Johannis church the first cathedral in Mainz, which was once a powerful territory in the former Holy Roman Empire. Besides the human remains, researchers also uncovered pieces of fabric and cloth shoes, as well as the remains of what appeared to be a bishop's hat.

The sarcophagus' location in the central nave of the church and the fact that it was pointed towards the altar also indicate the person buried inside was a church official.

"It's still possible that it's him," Faccani said. 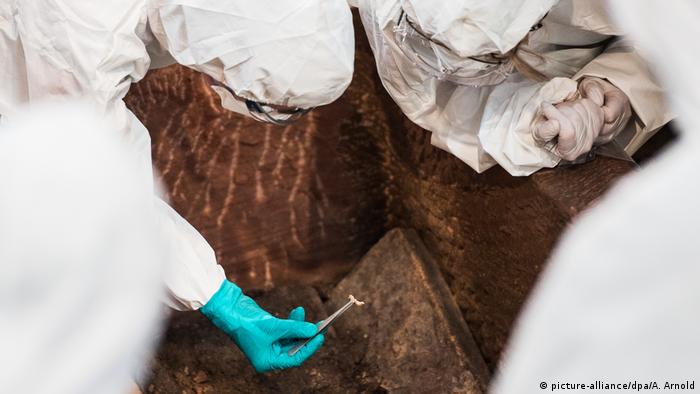 The team of archaeologists, anthropologists and textile experts will now examine the remains using carbon dating and DNA samples from tissue and bone samples.

They will need to work quickly, however, as the remains and specimens inside the grave are now exposed to the fresh air for the first time in what is likely 1,000 years and could change due to the oxygen exposure.

The sarcophagus will be open to the public over the weekend and is due to be closed again in the coming weeks.

Weapons, art and jewelry over the millennia are on display at the "Restless Times, Archaeology in Germany" exhibition in Berlin. Europeans, that much is clear, were constantly on the go. (21.09.2018)

Archeologists in Cologne are sure they have found what looks like the foundations of the oldest verifiable library in Germany. It was built by the Romans about 1,800 years ago. (26.07.2018)

What Europe's most ancient battlefield reveals

It is the site of a huge battle that took place 3,300 years ago in Germany. A relatively recent discovery, little is known about what actually happened there – but it still changes our perception of the Bronze Age. (09.10.2017)