Germans worry about war and inflation | Germany | News and in-depth reporting from Berlin and beyond | DW | 02.06.2022

Germans worry about war and inflation 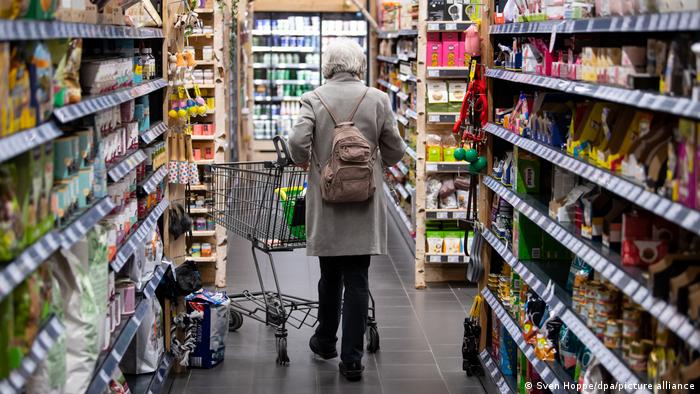 As inflation soars, German consumers are feeling the pinch

This week, German Chancellor Olaf Scholz made the announcement that Ukraine is to receive the most modern air defense system Germany has to offer, four multiple rocket launchers, and a powerful tracking radar to detect Russian missiles and drones. By pledging such high-tech equipment, Scholz surprised his critics who had accused him of dragging his feet for weeks.

The chancellor has good reasons for his cautious approach to weapons deliveries: Pacifism is deeply rooted in his center-left Social Democratic Party (SPD). This is also true of the majority of SPD voters, half of whom favor a cautious approach so as to not provoke Russia. This is the result of the latest "Deutschlandtrend" survey by pollster infratest dimap, which put questions to 1,337 eligible voters this week.

They found that supporters of the Green Party, one of the SPD's coalition partners in government, are strongly in favor of decisive action, including weapons deliveries and a tough approach towards Russia. This is remarkable, considering the party is rooted in the country's peace movement of the 1980s.

There is also a marked divide between western and eastern German voters on the matter of military aid to Ukraine: 53% of respondents in the west of the country support military assistance, while only 35% of those in the region that was formerly socialist East Germany do so.

How do voters rate these efforts? Fifteen percent of survey respondents said they felt that the sanctions were going too far, 41% thought they did not go far enough, while 41% also felt there should be more diplomatic efforts. Twenty-three percent of those surveyed deemed Germany's arms deliveries as having gone too far.

Over the past few months, voters' priorities have shifted. Last September, a majority named climate change as the most important problem that German policymakers should focus on. But now, foreign policy towards Russia and Ukraine and battling inflation top the list, pushing environmental concerns into third place.

The war is driving up energy prices, but food prices have also risen significantly. Almost half of all respondents said they already have to cut back significantly because of this. Among low-income earners, 77% say they are beginning to struggle, and so do 59% of eastern Germans, whose average household incomes are lower than those in the west of the country.

The German government has launched various measures to ease the financial burden on citizens. From June to August, there is the €9 ($9.67) monthly ticket for local public transport, the gasoline tax has also been reduced, and every taxpayer is to receive a lump-sum payment of €300 to mitigate the increase in heating costs. Even though the measures are only temporary, most of those polled were in favor.

Bad marks for the government

But overall, the ruling coalition government of SPD, Greens, and the neoliberal Free Democrats (FDP) is losing support: 59% of respondents express dissatisfaction with the government more than ever before since it took office last December.

Supporters of the main opposition parties — the conservative Christian Democratic Union and Christian Social Union (CDU/CSU) — and, above all, supporters of the far-right populist Alternative for Germany (AfD) as well as the growing number of non-voters are clearly critical of the government's course in Berlin. Among lower-income households and people living in eastern Germany, 70% express dissatisfaction.

The CDU/CSU manages to benefit from this trend and has forged ahead in the monthly national survey, polling at 27% the conservatives have again emerged as the strongest force in German politics. They headed the government for most of the 77 years since the end of World War II and lost power last year after 16 years in government under Chancellor Angela Merkel.

The SPD continues to lose support, while the Green Party continues to make gains on the federal level as in the regional states. Foreign Minister Annalena Baerbock and Economy Minister Robert Habeck of the Green Party have the highest approval ratings at 60%, far ahead of Chancellor Olaf Scholz (43%) and CDU chairman Friedrich Merz at 35%.

War in Ukraine: What is Germany's strategy?

Germany has been walking a fine line since Russia invaded Ukraine. Although it has joined Western sanctions and sent some weapons to Kyiv, its response has been seen to be far more muted than that of other allies.