Authorities in Flanders called it the "best preserved" find from the era. The bodies of all 23 crew members were found aboard the vessel, in a watery grave on the floor of the North Sea. 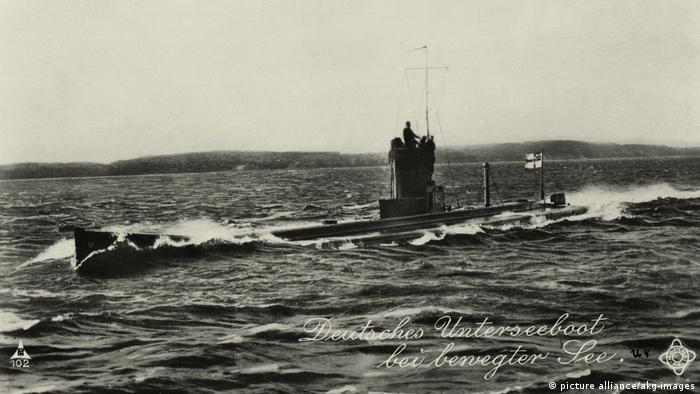 Belgian authorities announced on Tuesday that they had discovered the remarkably well-preserved wreck of a World War I German submarine, commonly called a U-boat, off the coast of West Flanders.

The WWI battle lasted 141 days, and left more than 1 million dead or wounded on all sides. Britain's Prince William, his wife Kate, and brother Prince Harry have attended an all-night vigil in Thiepval, France. (01.07.2016)

Verdun: The World War I war within a war in France

As German Chancellor Angela Merkel and French President Francois Hollande prepare to meet in Verdun, DW looks back at the World War I battle. The senseless massacre lasted 300 days and failed to produce a victor. (28.05.2016)

The French and German leaders have attended a series of events to commemorate those killed in the WWI campaign. They used the occasion to urge increased European unity in the face of many challenges. (29.05.2016)

The Indianapolis was sunk by a Japanese torpedo in the last days of World War Two after it had delivered components for the atomic bomb to be dropped on Hiroshima. Microsoft founder Paul Allen's team found the wreck. (20.08.2017)

"It's quite amazing that we found something like this," Western Flanders Governor Carl Decaluwe told the Associated Press, calling the find "very unique."

"The impact damage was at the front, but the submarine remains closed and there are 23 people still onboard."

The UB II-type submarine was found 25-30 meters (82-98 feet) below the surface on the floor of the North Sea. About 18 such vessels were stationed with the Flanders Flotilla in Bruges between 1915 and 1918 in order to disrupt British trade routes in the English Channel and the North Sea.

Thirteen of the submarines were destroyed, of which authorities have found 11. But, according to the local government, this recent find is the "best preserved" of them all.

Researchers believe that the damage to the front of the vessel indicates that it struck a mine with its upper deck. Governor Decaluwe said he had contacted the German ambassador to Belgium about proper disposal of the sailors' remains.

The impact WWI had on the fine arts is undeniable, and it is was the subject of an exhibition at Bonn's Bundeskunsthalle that focused in depth on the fate of modern art in the context of the war. (10.04.2014)

World War I on the big screen