A teachers group in the German state of Saxony-Anhalt has garnered criticism after saying girls should be encouraged to stay away from male - often Muslim - refugees. Politicians have accused the group of fear-mongering. 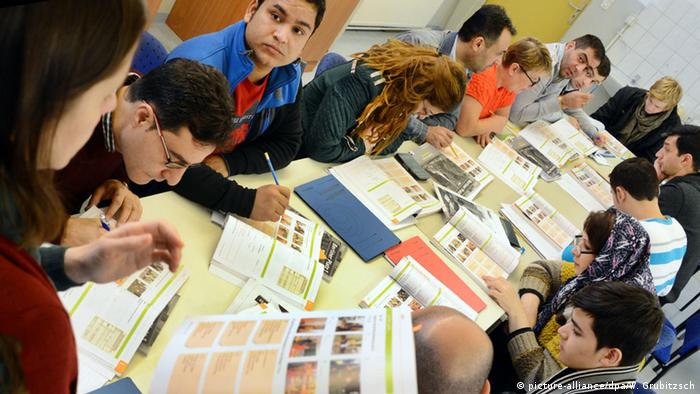 "An immigrant invasion is spilling over in Germany," said an article in a recent teachers union magazine, which went on to recommend girls stay away from "often attractive Muslim men."

The statement from the "Journal of the Philologists' Association of Saxony-Anhalt" that young women should be dissuaded from relationships with Muslims drew ire from state politicians on Saturday.

According to a report by German daily "Mitteldeutsche Zeitung," the original article by the teachers group, signed by leaders Jürgen Mannke and Iris Seltmann-Kuke, told instructors to warn their students of the risk of being molested by refugees and to resist the temptation to engage in "a superficial sexual adventure with the often attractive Muslim men."

The newspaper also reported that the article alleges that these "young, strong, mostly Muslim … often uneducated men" are entering the country "under dubious pretenses." Mannke and Seltmann-Kuke then go on to describe how innocent conversations in public transportation and in supermarkets can lead to sexual assault.

As a record number of people seeking asylum come to Germany, many escaping violence in their homelands, Saxony-Anhalt's education minister, Stephan Dorgerloh, took exception to the union's implication that the safety of female students was threatened by the refugee crisis. Speaking to the "Mitteldeutsche Zeitung," Dorgerloh accused the group of "amplifying rumors, spreading half-truths and exploiting its value as a union."

"The content [of the article] is completely base, it serves prejudice and the far-right fringe" of the political spectrum, state leader of the Green party Claudia Dalbert told the newspaper.

As Germany grapples with the unprecedented wave of human movement through its borders, sentiment towards the newcomers has largely been one of welcoming - though many incidents of arson and destruction to planned refugee homes have been recorded, particularly in the former East German states, including Saxony-Anhalt.

Interior Minister de Maiziere said Syrians would likely see their protections and rights curbed in the wake of the refugee crisis. But Berlin later denied that any changes were actually in the works. (07.11.2015)

A German daily reports that Berlin plans not to accord full refugee status to those fleeing Syria's civil war. Migrants would be able to stay for a more limited time and would not be able to send for family members. (06.11.2015)