As students protesting around the world demand action in fighting climate change, one German education minister has said she wants students back in classrooms. She said they could be escorted to class or even expelled. 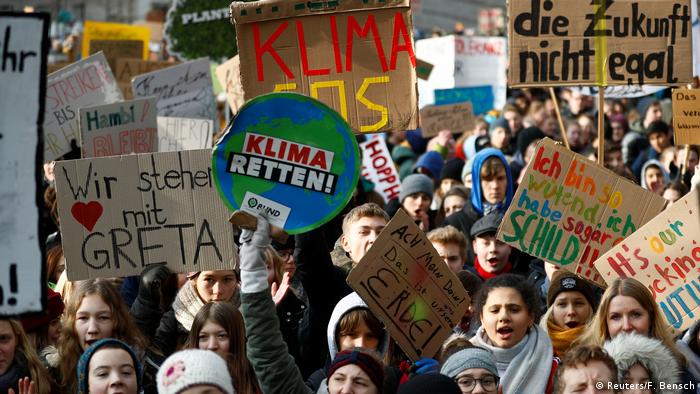 The letter from NRW Education Minister Yvonne Gebauer, sent on Wednesday, stated that students were legally required to attend classes and that if they didn't, they could face forced attendance, administrative offence proceedings and even expulsion from school.

Instead of attending school on Fridays, students have been gathering in several of the state's cities to hold "Fridays for the Future" demonstrations.

The protests were started by Swedish high school student Greta Thunberg in August 2018, when she held the first "school strike for climate" outside the Swedish parliament building to raise awareness of global warming.

Since then, the movement has spread across the world, with thousands of students participating in demonstrations. Recently in Belgium, more than 11,000 people took to the streets.

NRW Premier Armin Laschet also criticized the students on broadcaster WDR's Westblick program, saying it would be more plausible for them to meet after school.

Lower Saxony's Premier Stephan Weil, however, said he could understand young people's concerns, but the state government stressed that it did not condone skipping school, public broadcaster Deutschlandfunk reported.

"You say you love your children more than anything and you're still stealing their future," one sign read at a protest in Berlin.

After a meeting with student representatives who organized the protests in Hanover, Weil said that students were absolutely right to be concerned and that he could understand that young people were worried about climate change and dissatisfied with action taken so far.

In response to demands to stay in school, students defended their decision to protest.

"Train drivers don't strike in their spare time either," one said, referring to strikes by German train drivers unions that have brought rail traffic to a stop but are seldom told to get back to work during their labor standoffs.

Lou Franka Töllner, a 17-year-old protest organizer, explained that since there was no other planet, something had to be done now to protect the future for all generations that followed.