German soldiers probed over amorous flower drop by military helicopter | Germany| News and in-depth reporting from Berlin and beyond | DW | 14.08.2020

Who says German's aren't romantic? The military and police are investigating two soldiers after they used an army helicopter to pursue love — potentially breaching air traffic laws along the way. 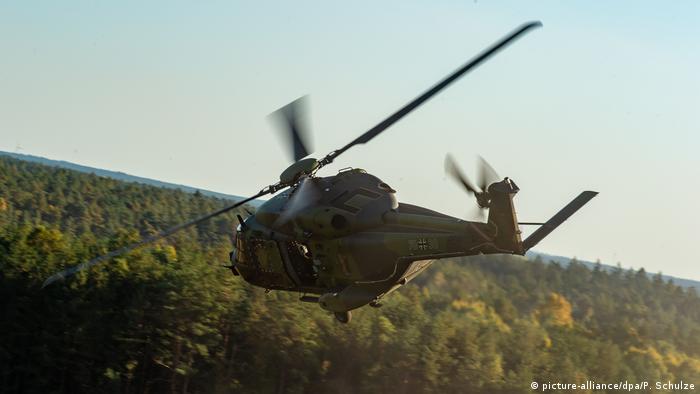 At least two German soldiers are being investigated for allegedly breaching air traffic laws after they delivered flowers to a fiancee using an army helicopter, a police spokesperson said on Friday.

The Bundeswehr (German military) personnel flew over the village of Arnsberg-Holzen in the western state of North Rhine-Westphalia, and dropped a white package that was collected by a woman and reportedly contained a bouquet of flowers, local media reported.

"The precise circumstances are still under examination," police said, adding that investigations were directed against at least two members of the armed forces – a 44-year-old local man and the pilot.

Authorities are also investigating how a military helicopter stationed in Nörvenich, near Cologne, had been used for personal purposes.

Authorities were alerted by a local resident, who contacted the police because the low-flying helicopter on Monday frightened some horses in the meadow.

According to witnesses, the helicopter descended to around five to ten meters above the ground.

Local newspaper the Westfalenpost tweeted: how the shock of the helicopter descent led a mare to lose her unborn foal.