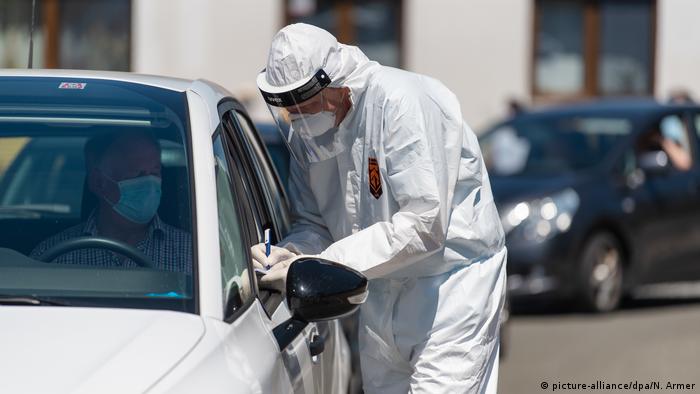 Söder fielded criticism after Bavaria's Health Minister Melanie Huml announced on Wednesday that 44,000 travelers returning to Germany's largest state were still awaiting their COVID-19 test results, of which 900 are positive. The testing was done at specially established centers on state highways.

"A blunder happened, and a very big blunder at that," Söder told reporters Thursday after the meeting. "The entire state government is sorry that these mistakes happened."

Söder said that Huml had twice offered her resignation, which he rejected. "I still have trust in her," Söder said.

Following the news of the testing debacle, Söder, who had to cancel a holiday to the North Sea coast, called the situation "very, very frustrating."

"This must be fixed immediately and must not happen again," he said in a tweet Wednesday. "All structures must be checked immediately."

Both Söder and Huml are expected to speak at a press conference later Thursday.

Huml said on Wednesday that a majority of the returning travelers awaiting COVID-19 results were tested in three coronavirus testing stations on Bavarian highways. She said the ministry had "no knowledge yet if any samples have been lost."

Travelers have been able get tested at such centers since July 30 as Bavaria, which has had the highest rate of infection of any German state since the pandemic began, grapples with the virus. But according to the Munich-based Süddeutsche Zeitung, several travelers have complained that they have received their results very late.

Huml said the main reason for the late results was that, until recently, test data was entered manually into tables on Microsoft's Excel program. She said the state health ministry had tried to solve the problem by increasing the number of staff, "but the number of tests has been increasing each day."

Initially, employees of aid organizations were responsible for entering coronavirus data, but private companies are now gradually taking over the tests. Huml said she expects the process to run more smoothly in the future.

Bavaria's Red Cross also said that it was tasked with setting up five testing centers in one day and technology to help them do so was not made available, which is why the test results had to be entered manually.

UN Secretary-General Antonio Guterres has warned that the pandemic may worsen existing conflict — and even create new ones. Find out more about the pandemic's latest major developments.