Scientists say it's the first time a fossil from a large butterfly species has been discovered preserved inside an ancient block of amber. They've described it as an "exceptional" find. 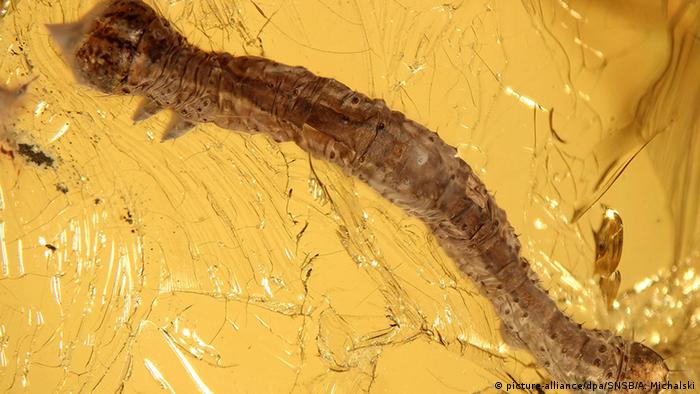 German researchers discovered a 44-million-year-old caterpillar, according to a paper published in the journal Scientific Reports on Wednesday.

The critter is the first caterpillar of its kind to be discovered in Baltic amber, according to researchers from the Bavarian State Collection of Zoology in Munich.

The 5-millimeter (0.2-inch) larva has been given the name Eogeometer vadens under the family of Geometridae butterflies, which comprises around 23,000 different species.

Scientists said the little caterpillar likely got trapped in a drop of tree resin, which ultimately hardened into amber and preserved the worm's unique structure over millions of years.

"Caterpillar finds in amber are rarities in any instance, and this is the first ever large butterfly fossil to be found in Baltic amber," study co-auther Axel Hausmann said. "This may be due to the noctural activity of most caterpillars," he added, given that resin would likely be closer to liquid in direct sunlight or warmer daytime temperatures.

Read more: What the … blue-horned caterpillar

Unlike most other butterfly species, Geometridae caterpillars only have two or three pairs of legs instead of the usual five pairs. This means they move forwards with an unusual gait — by pushing their hind legs to their rear legs, then stretching out and repeating the action.

The researchers said the fossil would provide an insight into evolutionary processes during the Eocene period (about 34-56 million years ago), when flowering plants butterfly species would have been interacting with were already well established.

One of the world's best loved children's books tells of a ravenous caterpillar that eats his way through cheese, chocolate cake and more! A German museum honors the now 90-year-old Carle's colorful original collage work. (25.06.2019)

In an accidental discovery, it has been found that larvae of the greater wax moth eat and digest polyethylene plastic bags in record time. Will this find solve our plastic garbage problem? (24.04.2017)

Carle has more than 70 books to his name, and was known for his signature colorful style of art. His family said he died on Sunday as a result of kidney failure. He is survived by a son and daughter.