A caterpillar that eats and digests plastic in record time | Science | In-depth reporting on science and technology | DW | 24.04.2017

In an accidental discovery, it has been found that larvae of the greater wax moth eat and digest polyethylene plastic bags in record time. Will this find solve our plastic garbage problem? 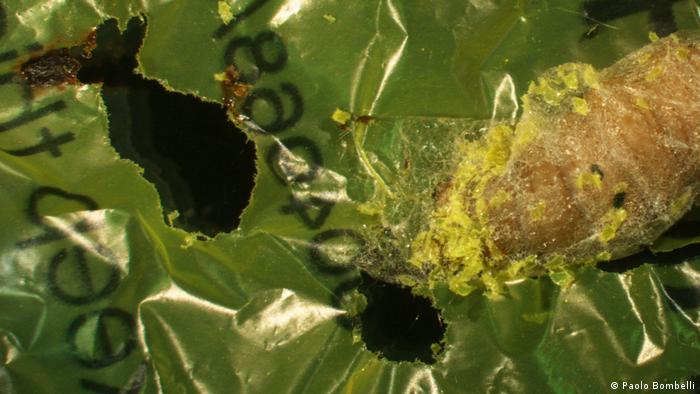 Federica Bertocchini has an exciting job and an amazing hobby.

She works as an evolutionary biologist at the Institute of Biomedicine and Biotechnology at Cantabria in Spain and is a beekeeper in her free time.

Almost by accident, she managed to fuse her passion for bees with her research. And, the result  may well be a solution to our plastic garbage problem.

A parasite in the bee hive

It's not only Federica Bertocchini who loves her beehives - the same goes for the greater wax moths (Galleria mellonella). The parasite lays its eggs inside the honeycomb. The larvae lives for six to seven weeks until they form cocoons and finally hatch as a new butterfly.

One day, the passionate amateur beekeeper removed the parasitic caterpillars from the beehive and stuffed them into a plastic polyethylene garbage bag. But, within a short time the larvae had eaten their way through the bag and out into freedom.

It is not entirely new that the wax worms - as they are also known - are able to eat their way through plastic. There are ample reports about this in online discussion boards amongstpet reptile lovers  and beekeepers alike. Reptile keepers use wax worms as fodder for their pets. The larvae are also popular bait used in sport fishing. 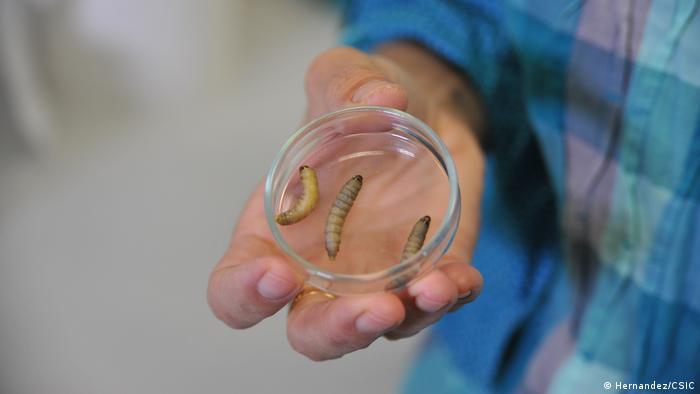 Wax worms are feared by bee keepers, but they are often used as bait in sport fishing or as fodder for pet reptiles

It remains unclear, however, whether the larvae merely eat the plastic, just to excrete it in a different form - as micro plastic particles - or whether they are able to digest it and turn it into a different product after metabolism.

What is known, is that the common clothes moth not only destroys woollen pullovers, but also those made of mixed fibres. However, the clothes moth only digests the woollen content of the fabric - the horn - excreting the artificial fibres as micro-plastic.

Biologist Bertocchini wanted to know exactly what happens with the worms invading her beehives. So, she used spectroscopic analysis and found that there is a difference between the clothes moth and the wax moth. The latter does not excrete microplastic, but actually transforms the polyethylene into ethylene glycol.

In cooperation with Paolo Bombelli  and Christopher Howe from the Department of Biochemistry at the University of Cambridge, Bertocchini conducted an experiment. The researchers exposed 100 wax moth larvae to a common plastic bag from a British supermarket. And waited to see what happened. 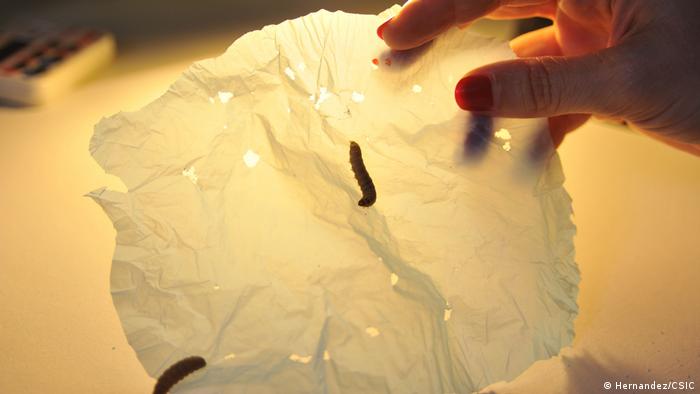 A lab test: the waxmorm eat their way through the plastic in under an hour

After only 40 minutes the first holes appeared in the bag. After 12 hours the larvae had eaten 92 milligrams of the plastic. (Fun fact: no bacteria is able to decompose so much material in such a short amount of time)

The Indian mealmoth (Plodia interpunctella) is also able to digest plastics with the help of bacteria, albeit at a much slower rate. Even chemical decomposition methods, like using nitric acid to break down plastic, can take months.

Beeswax is just another polymer

Bertocchini suggests that the wax moth possesses a specific enzyme, which is able to break up chemical bonds that occur both in beeswax and polyethylene molecules. 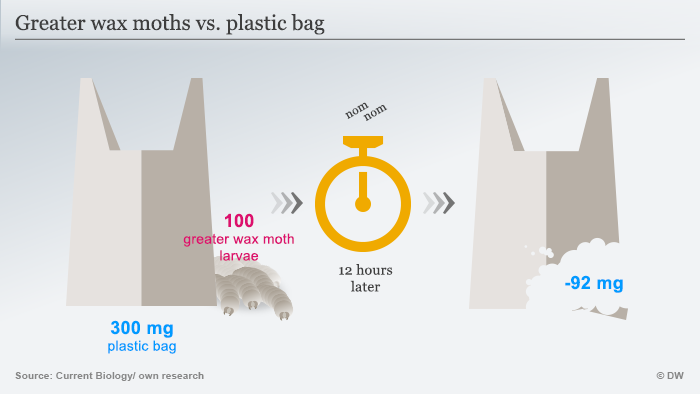 "Wax is a polymer, a sort of 'natural plastic' and has a chemical structure not dissimilar to polyethylene," Bertocchini says.

Another experiment underpins the suspicion that there is an enzyme at work.

The researchers took some of the wax moth larvae and mashed them up. Then they took the substance and applied it directly to the plastic bag. And lo and behold, holes appeared in the bag.

Now, the researchers are hoping to identify the enzyme. If it is one day possible to produce it in industrial quantities, one could either use it to decompose plastic bags or even apply it to landfill sites, which still hold large quantities of plastic.

Roughly 40 percent of plastic products worldwide are made of polyethylene. This amounts to 80 million tons per year.

Dr. Federica Bertocchini at the ibbtec

Paolo Bombelli at the University of Cambridge

Prof. Chris Howe at the University of Cambridge