German Schools Struggle With Bullying | Germany | News and in-depth reporting from Berlin and beyond | DW | 11.02.2004

Several recent cases of extreme violence at German schools have provoked officials to call for video surveillance. Experts say this won't help, adding that more trust between teachers and students is needed. 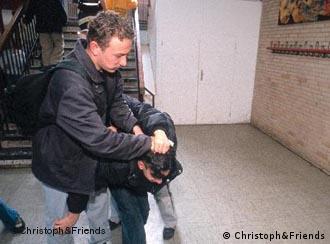 These two are posing, but others struggle with the real thing.

Many Germans were shocked last week when they saw video footage of a group of students who physically abused one of their class mates. Up to 10 students at a vocational school in Hildesheim in northern Germany were allegedly involved in beating and humiliating a 17-year-old, kicking him, forcing him to brush his teeth with a wire brush and smearing motor oil on his genitalia. The abuse apparently continued for months and took place during school hours in a storage room while the teacher remained in the classroom next door.

Five of the alleged abusers have been jailed so far and prosecutors are investigating the teacher's apparent failure to supervise his class.

On Monday, a second case of abuse at another vocational school in nearby Hannover made the news. Two 16-year-old students, a boy and a girl, were allegedly abused by five classmates. The boy was repeatedly beaten with a rubber hammer in a changing room; the girl was reportedly sexually abused.

In the last week, several more cases have come into the open. In Bavaria, a 13-year-old boy was allegedly beaten unconscious by several students at a bus stop in the town of Coburg. In a town near Munich, three students allegedly filmed themselves beating a 14-year-old over several weeks. In the southwestern German state of Rhineland-Palatinate, a 16-year-old student was jailed for allegedly beating a schoolmate. 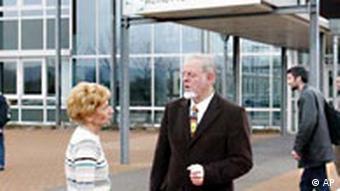 Hans-Hermann Sölter, center, in front of his school in Hildesheim.

The case in Hildesheim has created the most uproar, causing officials to call for the installation of video cameras to prevent further incidents. "It's one of the options we're looking at," Hans-Herrman Sölter (photo), the school's principal, told reporters.

But experts said video cameras won't help to prevent similar incidents in the future. "Cameras can be destroyed or covered up," Angela Ittel, who researches teenage behavior at Berlin's Free University, told DW-WORLD. Schools instead need to create a sense of community and involve students in the decision-making process.

"You have to reach out to the students and that's not really happening right now," Ittel said, adding that in general, school violence is not on the rise in Germany.

Teachers also have to make sure they deal with problems early on, said Mechthild Schäfer, an expert on teenage bullying at Ludwig-Maximilians-University in Munich. She added that teachers should also enforce "basic rules of democracy" in their classrooms and prevent a culture in which swearing and abuse is accepted.

In order to prepare teachers better for their jobs, they should also receive pedagogic training during their university education, Schäfer said. So far, prospective secondary school teachers are almost exclusively trained in the subject areas they plan to teach, but don’t get much guidance on how to interact with students.

A 16-year-old boy at a Bavarian school died of a self-inflicted gunshot wound on Wednesday morning after shooting his teacher in the leg in an incident reminiscent of Germany's own Columbine. (July 2, 2003)

A year after a teenager killed 17 people including himself in his former school, memorial services are being held in the city of Erfurt. Experts are asking whether lessons have been learned from the bloody massacre. (April 27, 2003)