German rail operator Deutsche Bahn is to transport cars produced by Audi using only renewable energy. With more corporate customers waiting in the wings, DB hopes to expand the green scheme in the coming years. 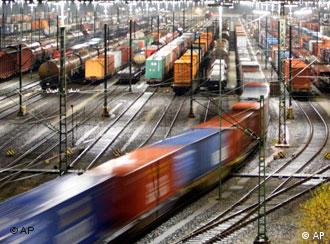 Deutsche Bahn has added its first carbon offset for freight

The company's logistics subsidiary DB Schenker will transport some 150,000 vehicles a year - loaded on a total of 625 trains - along a route between Ingolstadt and Emden, using electricity generated by renewable sources.

The carbon-free service is the latest of a clutch of new products being offered by DB, including passenger rail carbon offsets, which are currently used by 59 companies for business travel, as well as carbon offsets for the entire Hamburg commuter rail system.

DB is also negotiating with other corporate customers, according to a DB spokeswoman.

"We're confident that with Audi being the first customer for this scheme, there will be a positive signal effect in the market," she told Deutsche Welle. "The fact is private customers are paying attention to sustainability, and that will certainly lead to reduced CO2 output being a competitive advantage."

The company's carbon-free concept continues to use electricity from many sources. But when a customer chooses to go green, they pay a premium price to ensure the energy they consume is replaced with electricity from renewable sources. 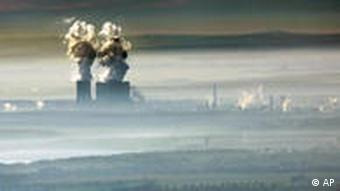 "DB uses coal-fired power plants; DB has a disproportionately high portion of nuclear-generated electricity in its electricity grid," Resch told Deutsche Welle. "To then offer customers CO2-free transportation for an additional cost… it leaves a bit of a stale aftertaste."

Resch said the fact that DB relies on coal and nuclear power for more than 50 percent of its energy needs tarnishes its credibility. It uses more electricity from those sources than the regular German consumer electric grid does, and could turn to more expensive electricity from renewable sources, he said.

"DB needs to increase its efforts overall to try to end its reliance on coal and nuclear power plants. At the moment they're missing an overall political stance - a goal - with exact steps along the way to render its electric grid CO2-neutral," he said. 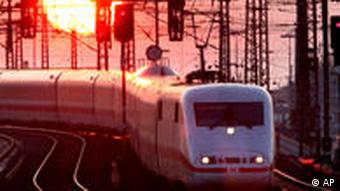 But Peter Westenberger, head of environmental information at the DB Environment Center, said Resch is "unrealistic to expect we're immediately able to go from zero to 100."

"The amount of energy we would need to do so would drive up energy costs to the point where in many cases we would no longer be competitive, and above all would lose market share to the roadways," he told Deutsche Welle.

"Over the years, we've always tried to keep our portion above that of the public mix," he said. "We're concentrating on reducing our use of non-renewable electricity, but it's a long-term program."

Rail operator Deutsche Bahn blamed global warming for the air-conditioning problems on its older ICE trains on Friday. But critics have pointed the finger at misfiring plans to float the company on the stock market. (16.07.2010)

German bus sector keen to catch up with Deutsche Bahn

Public transport in Germany is about to undergo a major overhaul as the govenrment moves to lift a special law favoring the national rail network over long distance bus lines. (19.03.2010)