German press review: Maassen promotion a win for the right

German media have criticized Angela Merkel's government for promoting Hans-Georg Maassen to a deputy minister role. A number of editorials pointed out that the biggest winner will likely be Germany's far-right AfD. 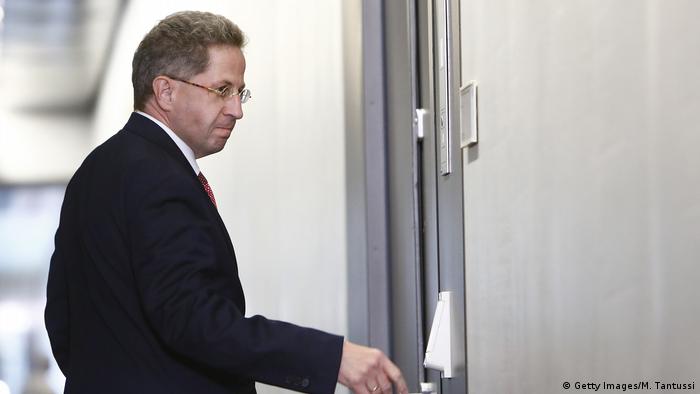 The national weekly paper Die Zeit called the message being sent by the government's promotion of Hans-Georg Maassen from president of Germany's domestic intelligence agency to deputy head of the Interior Ministry "unsettling." Maassen, "a man who has triggered a unique crisis of trust, government and credibility, should not be given a leadership position" in the Interior Ministry. He "ran the business of right-wing populists," the paper alleged, and with his "unproven accusation of 'deliberate misinformation' in Chemnitz, he has crossed the line to conspiracy theory" and "scratched the most important currency of democracy: trust."

The regional daily Mannheimer Morgen wrote that the whole fiasco "knows only one great profiteer: the Alternative for Germany party (AfD)." According to the paper, the AfD has turned Maassen into a martyr for its anti-refugee stance. "It is almost inconceivable that the CDU, CSU and SPD have given [Maassen] something of a new beginning," the paper wrote. "If the grand coalition is brought to the brink of the abyss by a single appointment, then one really has to worry about the stability of the government."

"It's a pretty lousy act that's being performed on the governmental stage," according to the Allgemeine Zeitung from Mainz, which added that Germans are within their rights to ask whether the government is going crazy. "What would have been the alternative? Breaking up the coalition? New elections? A minority government?" the paper asked. "We can't avoid the fact that, in this crazy world, the political situation is getting increasingly tricky."

Staggering 'from one crisis to the next'

Although Maassen's transfer kept tension within the government at bay, "the agreement reached by the CDU/CSU and SPD in the case of Maassen is not a good solution," according to the major regional daily Rheinische Post, which warns that "new conflicts are inevitably going to arise." The coalition "will continue to stagger from one crisis to the next." For the Social Democrats (SPD), the replacement of Maassen was more than a practical call. "In the end, it was also a question of self-respect — this is why the SPD was prepared to pay such a high price," the paper wrote.

Meanwhile, writers at the local Flensburger Tageblatt newspaper questioned whether they had understood the situation correctly: "As head of the secret service, Maassen is unacceptable, but as deputy minister he is exactly the right fit? Who could be expected to understand that?"

"SPD leader Andrea Nahles said over the weekend that she could not trust this man, but she has no problem with the fact that Maassen is now allowed to work one level higher," the paper continued before rounding up the events. "In short: Big wave made, but in the end it folds yet again," the editorial concluded. "After all, they want to stay in power. You can only shake your head."

No saving face. Everyone has lost.

"Anyone who thought that the transfer of Maassen would save the face all those involved was mistaken," the Neue Osnabrücker Zeitung wrote. "Everyone has lost: Horst Seehofer, who has to be accused of having only the Bavarian election in mind and constantly putting the coalition at risk. Angela Merkel, who is unable to restrain her adversary Seehofer and is partly to blame for the fact that Maassen is not being punished but praised," the paper wrote, adding that "the supposed victory of SPD leader Andrea Nahles also has a sour taste." The paper questioned how the SPD's stubborn insistence on Maassen's leaving the domestic intelligence agency would give a new profile to a party in decline. "In the end, this solution will above all promote political disenchantment, which the AfD will use to its advantage."