Joachim Gauck has embarked on a five-day visit of Japan, likely to be one of his last before retiring. His trip coincides with Germany's ruling coalition agreeing to nominate Foreign Minister Steinmeier as new president. 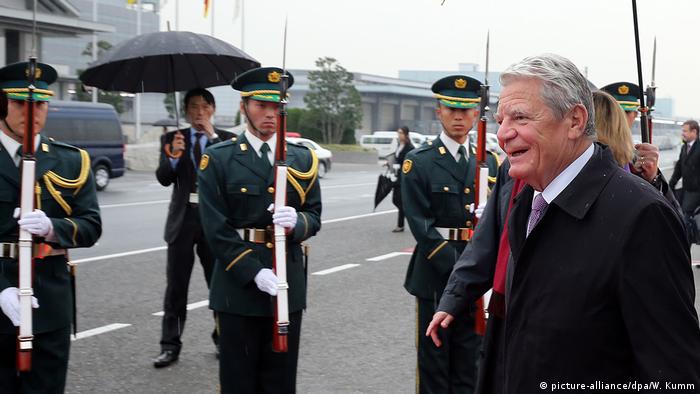 On the agenda are expected to be Donald Trump's election, as well as Japanese regional tensions with China and North Korea. The highlight of Gauck's trip will be a speech at the Waseda University in Tokyo on Wednesday.

Gauck and his partner, Daniela Schadt, will visit the capital Tokyo and the imperial city of Kyoto, as well as Nagasaki, which was wiped out during the final days of World War II, when the United States dropped an atomic bomb on the city.

This will be Gauck's first visit to Japan, but it underlines a strong relationship between the two countries - every German president has embarked on a state visit to Japan since WWII. The previous president, Christian Wulff, visited the country in October 2011.

Trump on the agenda

The transnational effect of Trump's US election victory looks set to dominate much of the diplomatic debate.

In an interview with Japanese newspaper "Yomiuri Shimbun" ahead of his visit, Gauck warned against rising euroskeptic and populist sentiment. Gauck wrote that "these movements stir up resentment, serve nationalist ideals and pretend to easily be able to solve the problems of our time."

Gauck added that watching the US presidential election campaign, and noticing how little facts and truth played a role, was "highly irritating." However, he said that the US remained a leading political, economic and military power. "I wish for Mr Trump to take on these responsibilities with great care," Gauck said.

The president had previously told German weekly "Der Spiegel" two weeks before the election that Trump's "unpredictability" was a cause for concern. "We can't say what could be expected from a President Donald Trump," Gauck said, adding that for many Germans "this constitutes a problem."

"When I look at Washington, I am worried," Gauck said.

Trump had warned during the campaign that he would consider withdrawing US forces stationed in Japan unless Tokyo sharply raised its share of the deployment cost.

The president's state visit coincides with Germany's ruling coalition agreeing to support the Social Democratic Foreign Minister Frank-Walter Steinmeier as the coalition's combined candidate for the next presidency.

Gauck, Germany's 11th post-war president, announced in June that he would not be running for a second stint as head of state. The 76-year-old said he was worried about his ability to continue devoting enough energy to the job if he continued into his eighties.

Sixty-seven-year-old former Prime Minister Shinzo Abe was shot dead while giving a campaign speech in the city of Nara. Japan spent the weekend mourning the death of its longest-serving prime minister.

A solemn funeral for slain former Japanese Prime Minister Shinzo Abe was held in Tokyo as hundreds gathered to pay their respects.

People in Japan are shocked and saddened by the shooting of former Prime Minister Shinzo Abe. Japan is a country where gun violence is extremely rare.