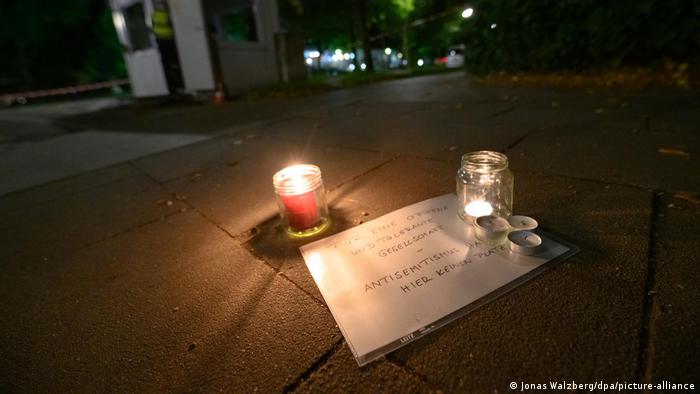 German investigators said Monday they were treating an attack on a Jewish student outside a synagogue in the northwestern city of Hamburg as an attempted murder with anti-Semitic intent.

The 26-year-old student was badly injured on Sunday by a man who repeatedly struck him on the head with a shovel outside a synagogue. Inside the synagogue, members of the Jewish community were celebrating Sukkot, the Feast of the Tabernacles.

"The current assessment of the situation suggests that this is an anti-Semitic motivated attack," said the police and prosecutors in a statement, adding that the suspect had a hand-drawn swastika on a piece of paper in his pocket.

The suspect is a 29-year-old German with Kazakh roots, who is said to have been acting in an "extremely confused" manner. The attack is the latest in a series of anti-Semitic incidents.

Chancellor Angela Merkel condemned the attack on Monday. "Such an attack is repulsive, no matter what investigations about the motivation and the condition of the perpetrator might show," Merkel’s spokesman Steffen Seibert said in a statement.

"And it must be clearly stated by everyone in this society: in Germany, every such act is a disgrace," he added.

'Hatred against Jews is a disgrace'

"Once again, we have to witness a terrible act of violence against a Jewish citizen," said Justice Minister Christine Lambrecht.

"The hatred against Jews is a disgrace for our country," she added.

Ronald Lauder of the World Jewish Congress also demanded action, saying "the attacker must be held responsible as must all who engage in any expressions of hate or intolerance."

"The situation that Jews increasingly become a target of hatred, must not leave anybody cold in a state of law like Germany,'' said Josef Schuster, the head of the Central Council of Jews in Germany.

The attack came almost exactly a year after an attack on a synagogue in Halle on October 9 2019 during Yom Kippur. The neo-Nazi suspect is currently on trial.

The man who tried to kill a Jewish student in front of a Hamburg synagogue is "mentally ill" and will be treated in a psychiatric facility, a German court has ruled.

A masked man was seen pouring liquid on the synagogue's exterior wall, which was then set alight. The attack in the southern city of Ulm has been slammed as "vile."