Heavily armed police have carried out a series of coordinated raids on the homes of members of the "Al-Salam-313" group. The targets are suspected of people smuggling as well as dealing in narcotics. 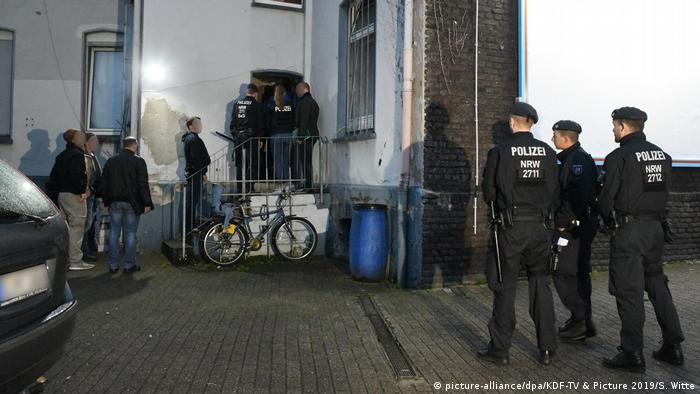 German police carried out early-morning raids at apartments in 11 cities on Wednesday as part of an operation targeting organized crime.

Hundreds of officers were involved in the raids in the western state of North Rhine-Westphalia, focusing on the Cologne area and the Ruhr Valley.

A spokeswoman for police in the city of Essen, Sylvia Czapiewski, said authorities targeted the homes of 34 suspects.

"We have been carrying out an investigation into a large group of people for some considerable time," she said.

Those targeted were suspected of involvement in people smuggling, as well as trading in weapons, narcotics and false IDs. One person was arrested.

North Rhine-Westphalia Interior Minister Herbert Reul told journalists that the seized evidence must be examined to  determine whether more arrests would be made.

The targets are members of the "Al-Salam-313" gang, according to a report in the German daily Bild. They refer to themselves as "Warriors of Muhammad" and the number 313 has a religious connotation.

The gang members are part of the Shiite denomination who believe that the hidden Imam Muhammad al-Mahdi will return to Earth with 313 companions. The term Mahdi means Redeemer, which therefore means that he is regarded as similar to a messiah in Islam.

"This is why they refer to themselves as Muhammad's companions or warriors," said one of the investigators.

In addition to dealing in narcotics and weapons, the gang members are suspected of having supported militias back in Iraq with the profits from their various activities.