German police kill sword-wielding man in front of his mother | Germany | News and in-depth reporting from Berlin and beyond | DW | 29.12.2019

German police kill sword-wielding man in front of his mother

Police said a man wielding a sword was shot dead after he threatened officers. Pellet guns, a crossbow and another sword were found at his home. 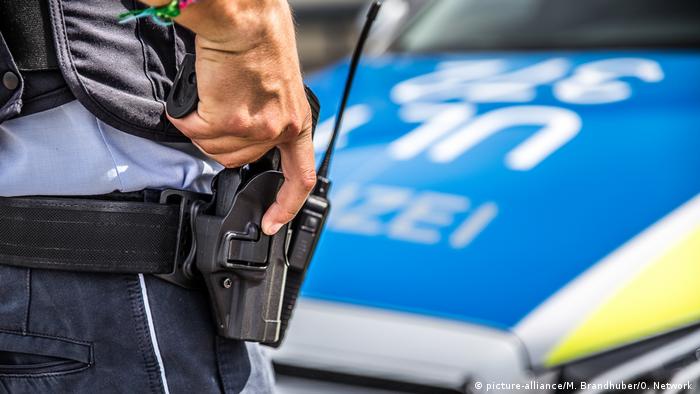 German police shot dead a man who threatened officers with a sword on Saturday after he crashed his car in the southern city of Stuttgart.

Police said in a statement that the 32-year-old man tried to attack two officers with a 70-centimeter (2.3-foot) blade and was shot multiple times after pepper spray failed to deter him. The man later died of gunshot wounds in the hospital.

Police had been alerted to a reckless driving situation after the man drove in the wrong direction around a roundabout and brushed the side of a building.

He then crashed head on into an advertising pillar with his 69-year-old mother in the passenger seat. Police found the two a short distance from the crash when the shooting took place. The mother was injured, but police said they were not sure how she sustained the injuries.

Later, a search of the man's home found two pellet guns, a crossbow and another sword, police said, adding that the dead man appeared to have had a psychological illness.

Police shootings in Germany are rare. According to the DPA news agency, police shot dead 11 people in 2018.

In response to Saturday's shooting, the police union demanded all officers be equipped with tasers.

"Between a baton, pepper spray and a firearm, from the point of view of the German Police Union, officers are missing an important resource," Ralf Kusterer, the vice president of the union, told DPA.

The late-night Christmas cruiser was pulled over by police outside the city of Cologne. In his defense, the electric scooter rider told police he "accidentally" entered the highway, reportedly still clutching a beer. (26.12.2019)

Police in the German town of Grünstadt had to subdue an intoxicated man carrying a samurai sword and firing blanks from a starter pistol into the air. (05.10.2019)