Police have arrested a suspect after a widespread manhunt in the southern German city. A man was stabbed in broad daylight with what was described as a "sword." 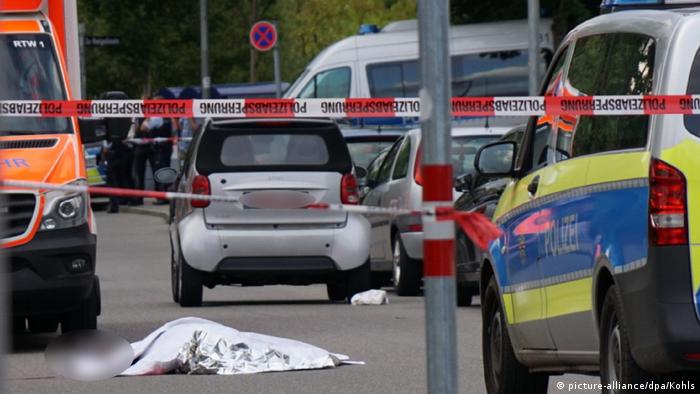 A 36-year-old man was stabbed to death in Stuttgart on Wednesday with a weapon described as a "sword."

The man was attacked in a street in the late afternoon, police said. Witnesses called police after the attack, which occurred during a dispute.

The victim succumbed to his injuries despite rescue efforts. Tabloid newspaper Bild reported the victim was a German Kazakh.

Police initially reported the alleged perpetrator was a Syrian citizen who had lived in Germany since 2015. However, local media have reported there may be discrepancies in that, with Bild reporting there was suspicion that the suspect could be a Palestinian who has assumed a false identity.

The attacker fled the scene by bicycle, but he was later arrested after a widespread search. Authorities could not confirm details about the identity of the suspect, but they said he was a 28-year-old who knew the victim.

A police spokesman described the act as "unusual and appalling."

The stabbing took place in the Fasanenhof area of Stuttgart, a residential district in the city's south.

Some witnesses are said to have filmed the attack and uploaded the footage to the web. Authorities are now investigating the use and reproduction of the videos, as this is prohibited by German law.

Stuttgart is the capital of the southern German state of Baden-Württemberg, and is the sixth-largest city in Germany. Several major German companies are headquartered there, including major carmakers. It is regarded as one of Germany's safest cities.

Police have shot four men dead during an attack on a police headquarters in Pekanbaru on Sumatra island. The third Islamist militant assault in Indonesia in the past week also left an officer dead and two wounded. (16.05.2018)

British police have made a second arrest in their investigation of an attack outside Buckingham Palace in London in which a man attacked officers with a sword. The assault is being treated as a terrorist incident. (27.08.2017)

Stephan E. is accused of murdering a member of Chancellor Angela Merkel's CDU party in central Germany. Prosecutors also suspect he was involved in a stabbing attack on an Iraqi refugee in 2016. (26.07.2019)