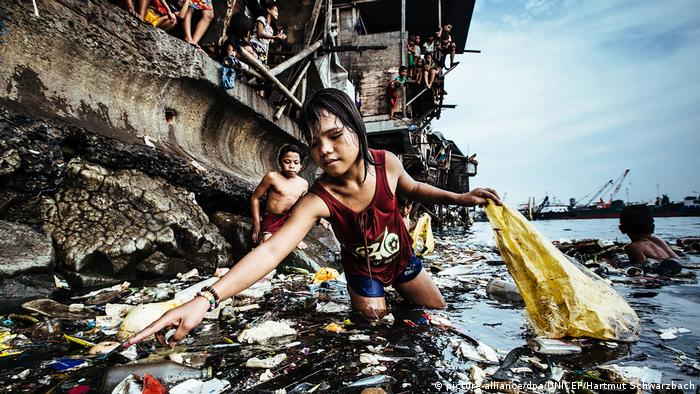 A German freelance photojournalist was awarded the "UNICEF Photo of the Year 2019" Thursday for his picture of a young girl fishing for plastic waste in polluted waters in the Philippines' Port of Manila.

Hartmut Schwarzbach captured the girl, Wenie, as she collected plastic pieces in exchange for some money from a recycler.

The UN Children's Fund said that Schwarzbach's photograph is significant because it tells "of the courageous fight for survival of children in the face of three tragedies of our time: poverty, pollution and child labor."

For many years, Schwarzbach has expressed his sorrow for poverty around the world through his photographs.

Elke Büdenbender, UNICEF's patron for Germany and wife of President Frank-Walter Steinmeier, said the photograph created a sense of "proximity to children" that hardly anyone else sees.

"It shows their need — but also their strength, even under the most bleak conditions not to give up," Büdenbender said. "Children are the most precious thing ..  We all bear responsibility for their lives and their future ... Children's rights cannot be just empty promises ..."

At the time of the photograph, the girl was 13 years old, according to Schwarzbach. She is now 15.

According to UNICEF, many young children are forced  to collect waste in Manila's contaminated waters.

"They risk their health and often also their lives, when they are in the germ-contaminated water ... to search for resources to sustain their existence."

UNICEF highlighted at the awards ceremony in Berlin that even if child labor is banned, "many girls and boys in slums have no other choice."

Read more: A ban on child labor in Africa is not enough

Schwarzbach currently works as a freelance photojournalist for a number of German magazines including Spiegel and Stern. He also works for several humanitarian organizations. His winning photo was taken for the Catholic magazine Kontinente!

For a long time, the German photographer has been fascinated by the impacts of garbage and plastic around the world.

Schwarzbach said he felt compelled to photograph such subjects as they were "not compatible with the Christian values of my upbringing."