German parliament passes law to extend use of nuclear power | Germany | News and in-depth reporting from Berlin and beyond | DW | 28.10.2010

Despite public protests and angry diatribes from the opposition, the German government on Thursday took the first major hurdle in a parliamentary vote toward extending the lifespans of nuclear power plants. 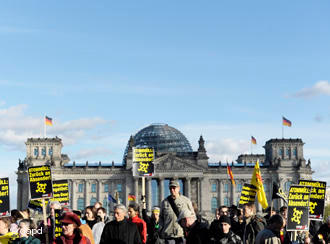 Extending the life spans of nuclear plants was a campaign promise

The bill passed comfortably 308 to 289, but theoretically the government had 332 votes on its side. The discrepancy is indicative of how divisive the issue is. In the parliamentary debate prior to the vote on extending the lifespans of Germany's nuclear power plants, the government of Chancellor Angela Merkel and the opposition engaged in a no-holds-barred exchange of accusations and counter-accusations.

The chairman of the opposition Social Democrats, Sigmar Gabriel, blasted the center-right coalition government of Merkel's Christian Democrats and the Free Democrats for not having a real energy concept for the future and unnecessarily “dividing society where it was already united.”

He said the plans to extend the lifetimes of Germany's 17 existing reactors by an average of 12 years only benefitted a few large companies and would cut into investment in renewable energies. 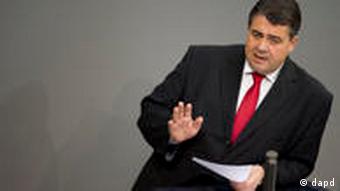 “Instead of helping to add another 300,000 jobs in this sector to the 300,000 already there, and instead of ensuring that climate protection and economic progress can really work together, you are going to stop progress,” Gabriel said.

The Green Party's parliamentary leader, Juergen Trittin, accused the coalition of “pork barrel politics” and “of watering down safety standards.”

“The government promised an energy revolution, but this is a coup d'etat,” he said.

Environment Minister Norbert Roettgen, called the criticism a bunch of “battle cries without arguments” and labeled opposition demands an “energy policy dud” with “nothing to offer.”

Roettgen defended the government's plan, arguing that it would actually increase the amount of renewable energy used across Germany from the current level of about 20 percent. 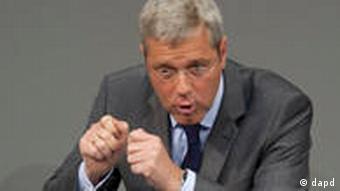 “Our aim is to generate 80 percent of German electricity from renewable sources by 2050. We want to lower carbon emissions by at least 80 percent and plan to raise energy efficiency by 50 percent. This is the future we are working on,” the minister said.

“Voters want future-oriented policies and not partisan bickering,” Roettgen shouted at the opposition.

While the politicians were debating the issue inside, outside on Thursday, around 2,000 protesters formed a human chain around the Bundestag. Nearby, Greenpeace activists mounted a giant anti-nuclear poster on the glass facade of Merkel's Christian Democrat party headquarters.

The legislation, as passed, now means that Germany will have nuclear power as part of its energy mix beyond 2021, the date Merkel's predecessor Gerhard Schroeder had pledged to turn them off for good.

The law could still face a tough fight in the Bundesrat, or upper house of parliament, where Merkel's coalition lost its majority in May - as well as court challenges promised by the opposition.

Opponents of the German government's plans for nuclear power claim success after a major demonstration in Munich. The event was the largest of its kind in Bavaria for more than two decades. (09.10.2010)