Tens of thousands take part in Munich anti-nuclear protest | Germany | News and in-depth reporting from Berlin and beyond | DW | 09.10.2010

Opponents of the German government's plans for nuclear power claim success after a major demonstration in Munich. The event was the largest of its kind in Bavaria for more than two decades. 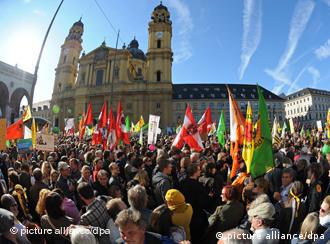 The protest drew a large and vocal crowd

Tens of thousands of people turned out on the streets of Munich on Saturday against the nuclear power policy of Chancellor Angela Merkel's coalition government.

A focus of the protest was the formation of a human chain, about 10 kilometers long, through the center of the city.

Organizers said that some 50,000 people in all took part in the day's events, while police put the number at around 25,000. 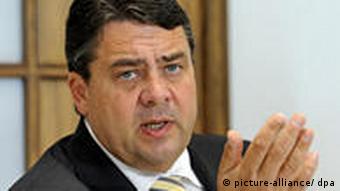 "It is an enormous success for us," said Marcus Greineder, chief organizer of the Bavaria Chain Reaction group, which organized the protest.

The heart of the demonstration was the city's Odeonsplatz, where a stage was set up to rally the crowd.

Public 'simply does not accept'

Social Democratic Party (SPD) leader Sigmar Gabriel said that the turnout revealed the level of opposition to a planned extension to the operating lifespans of Germany's nuclear power plants.

"This shows once again that the population simply doesn't accept government's lobby group policy in favor of nuclear firms."

Five Bavarian nuclear plants are affected by the extension, among them the particularly controversial Isar 1 reactor which has been in use since 1977. 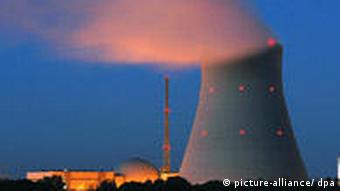 Several political parties and action groups rallied people to join the demonstration, calling for a move away from nuclear energy towards renewable energy.

The action was the biggest anti-nuclear event in Bavaria in decades. A rally against plans to build a nuclear reprocessing plant in Wackersdorf in 1985 - which was later abandoned - was attended by 30,000 to 50,000 people.

Organizers say around 100,000 people took part in a demonstration against the planned extensions in Berlin in September. Police put the number at 40,000.

A previous German government of the SPD and Green party decided to close all nuclear plants by 2021, but the current coalition has plans to extend that deadline by an average of 12 years.

Anti-nuclear protestors took to the streets of Berlin on Saturday to voice their anger over the government's decision to extend the lifespans of Germany's atomic reactors. Organizers say around 100,000 people took part. (18.09.2010)

After a 10-year moratorium, exploration into the future of the Gorleben nuclear waste dump is to resume. The Green party and environmental leaders are protesting the decision. (14.03.2010)