A Munich museum says 50 objects in its collection are of questionable provenance and may have been stolen by a German military commander during colonial times. 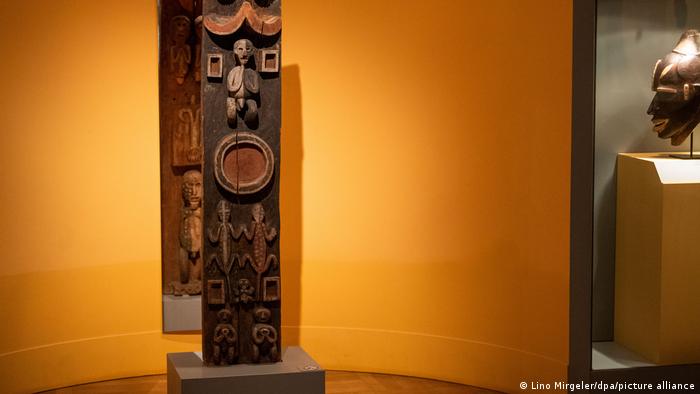 Due to difficulties faced by researchers, the provenance of one well-known object, a carved wooden post (pictured above) depicted by Munich's Blauer Reiter (Blue Rider) artists' group in their 1912 almanac, remains unclear

The Five Continents Museum in Munich on Friday announced that it had identified some 50 objects of questionable provenance in its collection.

That determination was made by a team of researchers, led by Albert Gouaffo of the University of Dschang in Cameroon and Karin Guggeis of the Five Continents Museum, who have been investigating some 200 objects from the institution's Max von Stetten collection since 2019.

Von Stetten had been a commander in the Imperial German Army and stationed in Cameroon — where experts say the pieces likely originated — in the late 19th century. Von Stetten later donated some 200 objects to the museum.

Researchers say that most of the objects von Stetten donated had likely been acquired legitimately, but roughly 50 others may have been stolen during military campaigns known as "punitive expeditions."

Among the objects researchers have identified as problematic are two sacred figures, three horns, two bark beaters and numerous weapons.

Scientists say research in Cameroon, in an effort to identify the provenance of a particularly well-known object  — a carved wooden post fancied by Munich's famous Blauer Reiter (Blue Rider) expressionist artists  — has become nearly impossible due to unrest in the country.

Recently, three Cameroonian researchers scheduled to visit Munich as part of the project were denied visas for Germany. Authorities from the Foreign Office in Berlin cited irregularities in their travel documents.

Museum representatives hope the situation can soon be rectified, noting that coming to grips with the highly sensitive issue of colonial injustice demands intense, personal cooperation, which a spokeswoman at the institution said is "the heart of postcolonial provenance research."

The Five Continents Museum, Germany's first ethnological museum, was founded in 1862. Representatives say it is unclear what the institution will do with the objects when research is complete.

After their visas were rejected, Cameroonian researchers may only participate online in a colonial looted art workshop organized by Munich's ethnological Museum Fünf Kontinente.