Wolves are largely protected by law from hunters in Germany. However, increased attacks on livestock and increasing pack numbers in the country's northwest have farmers worried. The number of wolf packs in Germany is steadily increasing

German Agriculture Minister Julia Klöckner is calling for the "regional management" of wolf populations in German federal states where the number of wolves is stable and attacks on livestock are increasing.

Klöckner told the regional daily Neue Osnabrücker Zeitung Monday that nearly 3,000 farm animals were killed or injured by wolves in 2019.

"If we let this go on, where will it end?" said Klöckner, adding that the goal is not to completely exterminate wolves, but to control their population.

Once nearly hunted to extinction in Germany, wolves are protected by law and can only hunted with permission from authorities and in exceptional cases.

However, wolf populations have increased over the past 20 years. There is ongoing political debate in Germany over lowering protection and making it easier to hunt wolves.

How many wolves are in Germany?

According to the German Federal Agency for Nature Conservation (BfN), there were 128 free roaming wolf packs in Germany in 2020 — 23 more than in 2019.

Using monitoring data from the Federal Documentation and Consultation Center on Wolves (DBBW), the BfN estimates there are just over 300 wolves roaming free in Germany.

However, wolves are largely concentrated in an area stretching across north-central Germany, with 98 of the 128 packs located in the states of Brandenburg, Saxony, Saxony-Anhalt and Lower Saxony.

What rules are in place?

Klöckner said wolf population control is needed in places like Lower Saxony with large swathes of farmland and an increasing number of wolves. 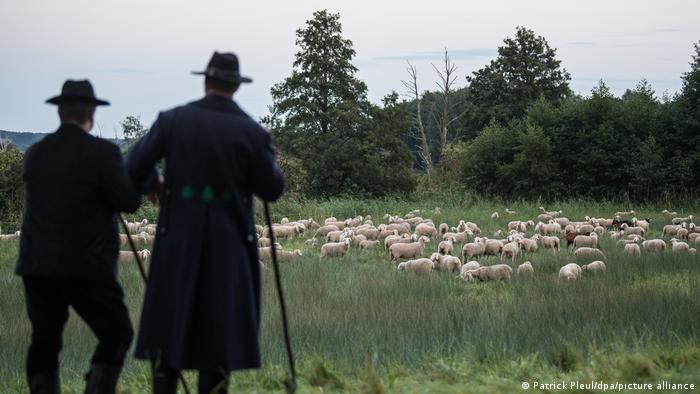 Two shepherds on a 'wolf watch' in Germany's Brandenburg state

The bill was passed following a year-long debate between Social Democrat (SPD) Environment Minister Svenja Schulze and Klöckner over how to balance the interests of wolf protection and addressing farmers' complaints.

Livestock farmers will have the right to shoot wild wolves if they are causing "serious damage" to their animals.

Formerly, farmers were only allowed to shoot if the wolves threatened the farmer's livelihood.

However, Klöckner has advocated for the establishment of wolf-free zones, and has said the 2019 reforms do not go far enough to protect livestock.

She said SPD coalition members in the federal cabinet have been behind most of the resistance to lifting protection of wolves.