Germany's defense minister has vowed 'consequences' over a nerve agent attack on ex-spy Sergei Skripal, which the UK blames on Russia. She also tied the attack to the use of chemical weapons in Syria. 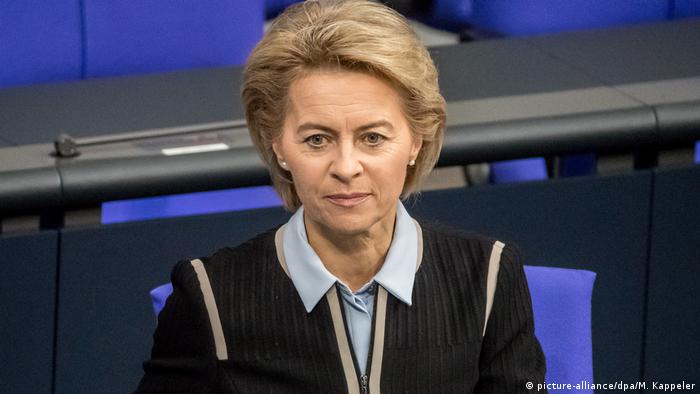 Russia must cooperate in an investigation into the nerve agent used against an ex-spy on British soil, Germany's defense minister said Thursday.

Britain has said it was "highly likely" Moscow was behind the attack, or that it had "lost control" of the military-grade nerve agent used against ex-spy Sergei Skripal and his daughter, Yulia, nearly two weeks ago. The two remain in critical condition.

"It's the very first time since World War II that a horrible chemical weapon has been used on European soil," von der Leyen said, demanding Russia contribute to providing clarity on the incident.

Russia has denied any involvement in the nerve agent attack, which prompted a UN Security Council meeting on Wednesday.

NATO Secretary General Jens Stoltenberg on Thursday also decried the attack as "unacceptable" and said nerve gas use has "no place in the civilized world."

"The attack in Salisbury has taken place against the backdrop of a reckless pattern of Russian behavior over many years," he said.

Stoltenberg is set to discuss the Skripal poisoning with the UK's Foreign Secretary Boris Johnson next week.

Von der Leyen said that in addition to convening the Security Council, UN chemical weapons experts must examine the evidence.

"When we have an evaluation [from the UN], and it will come, then we must talk about consequences," the defense minister said.

The UK on Wednesday announced a range of measures against Russia, including expelling 23 diplomats.

However, Tom Tugendhat, a British MP and chairman of the foreign affairs committee in the House of Commons, told DW that Russia's actions were "warlike."

"Had [this chemical] been opened on the London Underground, for example, it would have killed hundreds of people. And to use it next to a children's playground, where, had the children been there, it would have killed 30 or 40 children. This is a completely unacceptable, warlike act by a violent, deranged regime that is weakening and lashing out. This is a corrupt dictatorship that has to stop," he said.
Read more: Sergei Skripal case adds to West's 'massive trust deficit' against Russia

Russia has said it would cooperate in the investigation, but demanded Britain provide samples of the nerve agent. Russia wants 10 days to respond, in accordance with rules in the chemical weapons convention.

Von der Leyen also tied the UK nerve agent attack to events in Syria, where Russia is allied with President Bashar al-Assad. The Syrian regime has been accused of using banned chemical agents against civilians and rebels.

"We see the Assad-allied forces using poison gas. Russia is the one the allies of Assad. That's why it's crucial for Russia to clarify what happened there," von der Leyen said.

The EU will stand with the UK in any action against Russia over a nerve agent attack on British soil, a senior official has said. Russia says there's no connection and has summoned the British ambassador. (13.03.2018)