The Bundeswehr has identified 89 far-right extremists and 24 Islamists, a German media group reported. The number of extremists has fallen sharply since Germany abolished compulsory military service in 2011. 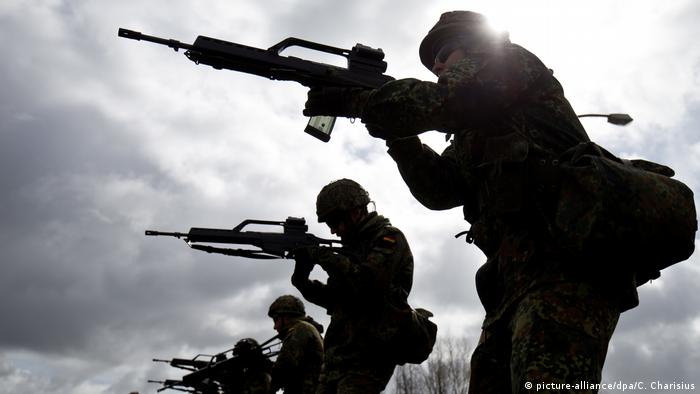 The German military has identified 89 far-right extremists and 24 Islamists within its own ranks since 2011, newspapers belonging to the Funke media group reported on Saturday, citing a Defense Ministry report.

The German military — known in German as the Bundeswehr — has been under pressure to deal with Nazi sympathizers among its ranks after an army lieutenant was found last year to be leading a double life posing as a Syrian refugee and planning a terrorist attack.

But Germany's Military Counterintelligence Service (MAD) told Funke that both the number of suspected cases and the number of identified extremists had "decreased significantly" since Germany suspended conscription in 2011.

The number of suspected cases of right-wing extremism have halved to an average of 300 per year, according to Defense Ministry data. Of the nearly 90 right-wing extremists identified, 67 cases date from the period when it was mandatory for all German men to serve in the military.

"The Bundeswehr does not want Nazis in its ranks. If you can fish them out at entry level, all the better," parliamentary commissioner for the armed forces, Hans-Peter Bartels, told Funke.

The MAD has intensified its security checks on those applying for a job with the Bundeswehr. This has led to several applicants with an extremist background being denied a position in the German military.

The MAD also investigated 300 suspected cases of Islamism in the Bundeswehr since 2011, according to the report.

One third of the cases were eventually confirmed; 76 suspects left the military before charges could be brought against them.

One year ago, a right-wing extremist German army officer was arrested on suspicion of terrorism, then it was discovered he was also leading a double life as a Syrian refugee. The case is anything but closed. (26.04.2018)

Following recent revelations of far-right extremists within its ranks, German Defense Minister Ursula von der Leyen has moved to ensure that the Bundeswehr fighting forces distance themselves from their tainted past. (28.03.2018)

A German lawmaker has criticized discrepancies in the reporting of right-wing sympathizers among the military's ranks. The identified extremists could use their military training to advance their cause, she warned. (23.10.2017)