Doctors have warned against jumping to conclusions after three births at one hospital in which children were born with hand deformities. Clinicians are investigating whether the anomalies are linked. 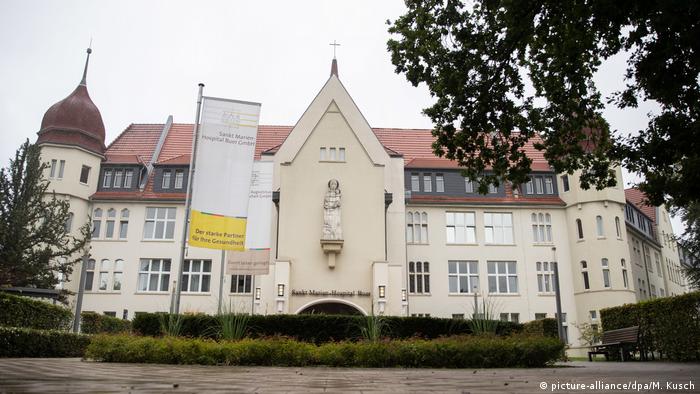 Health officials have warned against panic after a pattern of anomalies appeared among newborns at a single Gelsenkirchen hospital.

Similar hand deformities were observed in three deliveries — over a 12-week period — at Saint Marien Hospital in the northerly suburb of Buer.

The hospital decribed the appearance of such similar defects in such a short space of time as "striking." State health ministries across Germany are set to ask hospitals under their jusrisdiction whether similar birth defects have been observed.

However, the director of Mainz University's Center for Pediatric and Adolescent Medicine, Fred Zepp, said the observations so far amounted only to "an early signal."

Zepp said an investigation was needed to determine if there was a cluster, or if it had merely been a chance anomaly.

Two of the children had underdeveloped palms and fingers on the left limb, but a normal forearm. A third infant had the same symptoms on the right. Doctors say there were no "ethnic, cultural or social similarities" between the affected families other than that they all lived in the local area.

There was also a measured response from the head of neonatology and intensive pediatric medicine at Dresden's university clinic, Mario Rüdiger.

"There are occasionally situations when a rare disease does not appear for a long time, and then suddenly several children are affected in succession," Rüdiger told the broadcaster MDR.

German Health Minister Jens Spahn on Tuesday criticized some of the conjecture. "I now read the wildest speculation, including radiation from mobile phones," Spahn said. "We should only draw conclusions once we actually know something."

Sonja Liggett-Igelmund, a midwife based in the western city of Cologne, brought the case to light. She last week told Germany's Süddeutsche Zeitung newspaper that, since doing so, she had been made aware of other similar cases.

The cases are reminiscent of similar instances last year in isolated rural regions of France, which sparked a national investigation.

They also hark back to thethalidomide drug scandalof the 1960s, which caused stillbirths and limb deformities in newborns. Mothers of the infected infants had been exposed to thalidomide — created by the German pharmaceutical firm Chemie Grünenthal and known in Germany by the brand name Contergan — which was prescribed as a remedy against morning sickness.

A pharmacist has been found guilty of 14,500 counts of violating drug laws and 59 counts of fraud. The scandal is the largest in recent German medical history, costing public health insurers €17 million. (06.07.2018)

A drug used to treat epilepsy has led to up to 4,100 cases of "severe malformations" of children in France, according to regulators. Despite the risk, a ruling has allowed pregnant women to continue to use it. (20.04.2017)

Why researching drugs in pregnancy is an urgent women's health issue

The list of withdrawn drugs is long and the reasons varied. But why do drugs like thalidomide and sodium valproate, or painkillers like OxyContin, remain on the market, even once we've see the damage done? (28.09.2017)