Opposition politicians have called for the ultranationalist Turkish Gray Wolves group to be banned. The call comes days after France proscribed the organization, claiming it helped foment hatred and violence. 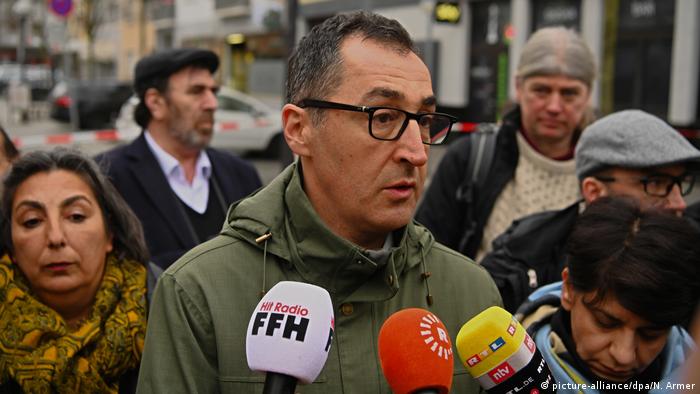 Politicians from Germany's opposition parties are urging the government to follow the lead of Paris in banning the right-wing Turkish Gray Wolves organization.

The appeal came amid a diplomatic dispute between France and Turkey and growing concerns about the activities of the nationalist movement.

Green party lawmaker Cem Özdemir said he believed the group was the largest right-wing extremist organization in Germany, with up to 20,000 members. The largest Gray Wolves umbrella organization, according to Germany's domestic intelligence service, is the ADÜTF, with some 170 associations and 7,000 members.

Özdemir — a former co-leader of the Greens — said the Gray Wolves were responsible for hundreds of murders in Turkey but did not limit their activities to that country.

"They also threaten members of the Turkish opposition and minorities in Germany," Özdemir told German newspaper Die Welt. Surely it cannot be that Turkish right-wing extremists in the middle of Berlin, Dortmund or Hamburg intimidate, beat up or threaten the lives of peaceful citizens. The German state must protect these people."

The Gray Wolves — whose members are known for greeting one another with the "wolf" hand salute — was a moniker given to members of a fringe Turkish movement that emerged in the 1960s and 70s.

Closely aligned with the extremist right-wing MHP party, the group promoted a radical agenda and used violence against leftist activists and ethnic minorities in the 1980s. The man who shot and wounded Pope John Paul II in 1981, Mehmet Ali Agca, is known to have been a Gray Wolves member.

Özdemir was one of three Green members of parliament who directly appealed for the group to be banned in an interview with the Redaktionsnetzwerk Deutschland newspaper group on Friday.

He and fellow lawmakers Irene Mihalic and Konstantin von Notz claimed the organization was "the extended arm" of the Turkish president. They said the group had "again and again stirred up hatred, threatened people and were also involved in violent actions."

Left party lawmaker Sevim Dagdelen made the same appeal on Thursday, demanding the dissolution of the ADÜTF in particular. Dagdelen said the umbrella group helped foster "discrimination and hatred" and was involved in acts of violence.

Gauland, whose party constitutes the largest opposition party in Germany's lower house, the Bundestag, said such a ban was overdue. "France is a role model here in the fight for freedom and democracy."

Turkey and France at loggerheads

Turkey threatened countermeasures when France banned the group on Wednesday, saying that the government there had a duty to "protect the freedom of assembly and expression of Turks in France."

French Interior Minister Gerald Darmanin announced the dissolution of the group, saying it incites discrimination and hatred and is implicated in violent actions.

Turkey and France have been increasingly at odds over several issues recently, most notably over French President Emmanuel Macron's vow to uphold secular values. It also comes against the backdrop of heightened tension between France's Armenian and Turkish communities over the conflict in the region of Nagorno-Karabakh.

Turkish President Recep Tayyip Erdogan has fired the governor of the country's central bank. The move comes after Turkey's currency, the lira, fell to a record low.