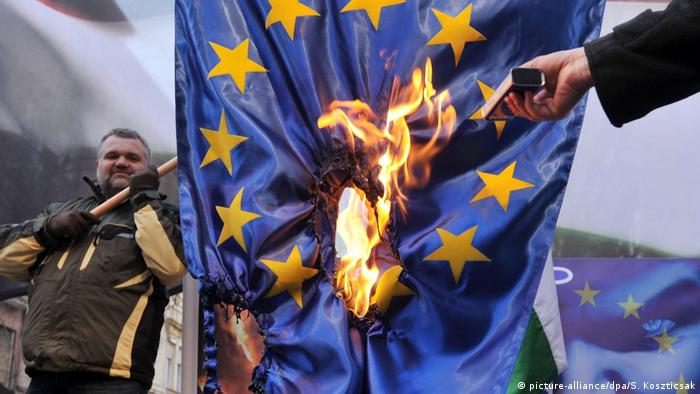 The German parliament moved closer to banning the public burning of flags of foreign nation states on Wednesday.

Representatives of the ruling coalition have drafted a bill that would impose a fine or prison sentence on those who burn flags or national symbols of foreign countries, as well as of the European Union.

Burning the German flag publicly is already illegal in Germany, but the law is murky when it comes to burning the flag of any foreign nation or of the EU. Each case of flag-burning is currently dealt with on an individual basis, usually in terms of whether it can constitute a hate crime.

"We will not allow these symbolic acts of hatred and contempt to continue," said junior Justice Minister Christian Lange of the center-left Social Democratic Party, the coalition partner of Chancellor Angela Merkel's center-right Christian Democratic Union.

The CDU justice committee spokesman, Jan-Marco Luczak, agreed, saying that the act of flag-burning "should not be allowed in civilized countries." Both parties signaled their support for the bill.

The idea for the bill dates back to 2017, when Israeli flags were burned at a protest in Berlin.

"Something like that should not be allowed to happen in Germany," said Felix Klein, the parliamentary representative for tackling anti-Semitism.

Will the new bill become law?

A bill had previously been introduced to parliament concerning the burning of just the EU flag, but Wednesday's debate concerned a new bill that would expand fines and prison sentences to those burning the flags of any foreign country.

The ruling coalition has not yet set out a time frame for the bill, which will need to be voted on by parliament.

Although the bill will most likely pass with CDU and SPD support, opposition parties expressed skepticism.

Opposition from the opposition

The Left party and the Greens both declined to support the bill, saying that it was not up to the government to regulate flag-burning. The business-friendly Free Democratic Party also warned against an expansion of government control regarding this issue.

The far-right and anti-immigration Alternative for Germany party, the third-largest party in the German parliament, also refused to support the bill.

"The EU is not a state," said representative Bernd Baumann. "Therefore their symbol should not have the same rules attached to it."

The burning of foreign flags has become increasingly common in Germany, often at protests and rallies.

ICYMI: Three stories to make you smile 6m ago