The döner kebab has filled many a hungry belly and is now set to reach a new audience – courtesy of Germany’s largest supplier. 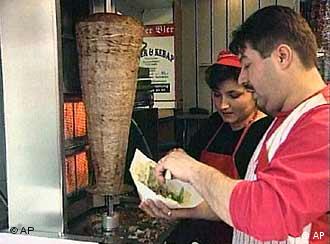 Coming to a fast food outlet near you - wherever you may be.

It’s such a simple idea for a fast food meal. Grilled meat combined with salad and dressing in a lightly toasted bread pocket. Turkish in origin, the meat was traditionally served on a bed of rice. But the döner bread sandwich common throughout Germany was supposedly invented in Berlin in the 1970s.

Far from being simply the staple diet of drunken hordes on their way home from sampling the local brew, the döner kebab has become big business in countries all over the world. None more so than in Germany, the country with the largest Turkish population outside Turkey itself. A speciality of the land at the crossroads of Europe and Asia, the döner kebab is a symbol of the multi-cultural exchanges that have taken place in Germany in the last 40 years.

Döner, by the way, comes from the turkish word “döndurmek” which roughly means “it spins”, in reference to the spinning vertical spits that the kebab meat is on. 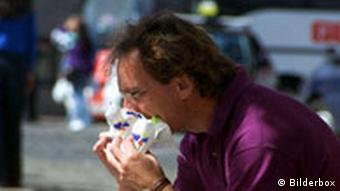 According to figures from the Center for Turkish Studies in Essen, there are over 400 hundred providers of kebab meat in Germany, serving 12,000 outlets which in turn provide employment for 42,000 people.

Such is the demand for the humble kebab that the total number of outlets in Germany have a combined turnover higher than that of McDonalds, Burger King and Wienerwald, the German sausage vendor, put together. The annual sales of döner kebabs in Germany total almost €1.5 billion with 720 million meat pockets sold every year.

One of the largest providers of all things döner is the Karmez company, based in Frankfurt. With a yearly turnover of €20 million and subsidiaries in Paris, Antwerp and Barcelona, Karmez provides the European kebab market with everything from aprons and masks to plastic table cloths and, of course, döner meat. “A good döner has a maximum of 20 percent fat,” says Enfil Tütücünbasi, the sales manager for Karmez. Each day, his company produces and sends out over 20 tons of said meat to Europe’s vendors.

Tütücünbasi’s family came to Germany in the 1970s and became involved in the business in the early 1980s, working in established kebab shops and delivering döner meat to vendors, supermarkets and restaurants. That is, until Enfil Tütücünbasi’s brother came up with a great, yet simple, idea. Instead of delivering other people’s meat, they should produce and deliver their own. The rest is fast food history.

Now the family business has turned into an international concern with 140 people working at their Frankfurt base alone. And the workforce is not only made up of Turks. “We have a multi-cultural workforce,” said Önder Tütücünbasi, the company’s director of finance. Two thirds come from Turkey with the remainder coming from Germany and other European countries, and some from as far away as Africa. 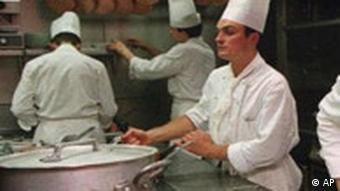 Karmez operates with a strategy of only three words, according to Önder Tütücünbasi: quality, diversity and innovation. The quality of the company’s products does not seem to be in question. For the past five years, Karmez has been awarded the seal of approval by both the German Agricultural Society (DLG) and the Central Marketing Association of German Grocers (CMA).

And in the areas of diversity and innovation, it seems that Karmez and the family Tütücünbasi are not ones to rest on their pita breads. They plan to expand into serving canteens, catering firms and restaurants in an attempt to attract a new clientele. There are even plans for a franchise network of their own outlets.

With sales already outstripping their more global minded competitors in the fast food sector, Karmez may be preparing to take its first steps towards döner domination. Today - Germany, tomorrow - the world.

McDonalds To Dish Up Pizza With New Chain

With Donatos, the company famed for its Golden Arches is planning to bring its first chain to Germany that doesn't include the McDonald's name. That could spell good news for pizza lovers in Munich and Frankfurt. (August 12, 2002)

Berlin: It's the Wurst!

A favorite of chancellors, pop stars and any native son in Germany's capital, currywurst is the real Berlin treat (June 18, 2003).

The American sandwich maker is seeking to cut in-roads into the German lunch market with its trademark meatball sandwiches and hoagies. (June 14, 2002)

Doener 365 - The Homepage of the Kebab

Everything you ever wanted to know and lots more in this extensive site dedicated to the Doner kebab. In German only.