Justice Minister Heiko Maas has said Germans "must reckon" with the idea that internet-based misinformation could play a part in the 2017 federal election. MPs from Merkel's CDU party will be briefed on the issue Monday. 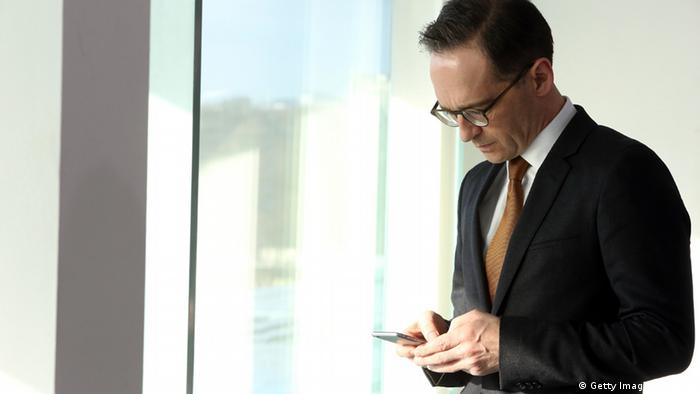 A software expert is to warn German MPs about the threat of false news ahead of next year's election. Chancellor Angela Merkel is concerned the use of so-called social bots could harm her chances of a fourth term. (25.11.2016)

Maas is the latest public figure to voice such concerns, following revelations that social media networks helped spread false and malicious information in the lead-up to November's presidential election in the United States. "The Washington Post" has said Russia was behind the effort.

It's not clear if fake news and propaganda helped sway the US election in any way; however, millions of people around the world get their news through what's shared on Facebook and other social media sites.

Facebook and Google have said they are tightening up the spread of misinformation on their sites.

One development that has concerned lawmakers is the spread of so-called "social bots" - software that can mimic human behavior on social media sites by publishing messages or liking posts.

There is growing alarm over the influence of social bots on potential voters.

It has also been reported that Germany's far-right, populist Alternative for Germany (AfD) has flagged its intention to use social bots as part of its campaign strategy next year.

'Dark side of the internet'

"Unfortunately, this is a dark side of the internet, a side we have to deal with more intensively," Maas said. According to the minister, the spread of misinformation would best be countered by greater transparency - calling on social media networks, like Facebook, to disclose the basics of their business and information practices.

Maas' comments come as MPs from Chancellor Angela Merkel's CDU party prepare to be briefed on the issue on Monday. Last week, Merkel announced her intention to run for a fourth term in office.

"Merkel is really interested in the topic of bots and fake news and hate speech on the internet and she's very well informed," said Simon Hegelich, a Munich-based professor of political data science, whom Merkel has invited to Berlin.

Hegelich said the impact of social bots on the democratic process has yet to be fully researched, but those with extremist and radical opinions can often outgun more moderate voices.

"Suddenly the whole picture is distorted and society appears to be totally polarized," Hegelich said.