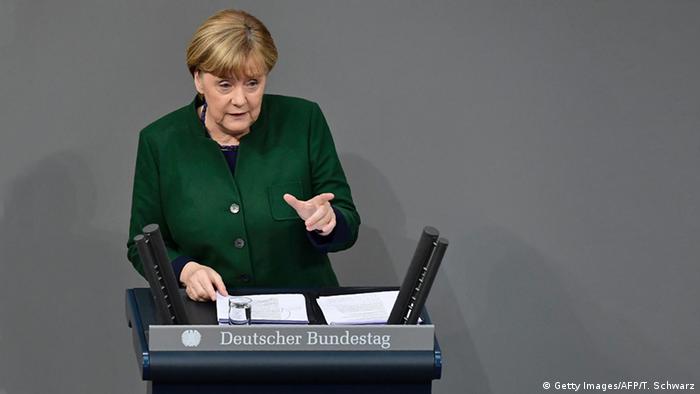 Around two-thirds of Germans say they welcome Chancellor Angela Merkel's decision to stand for a fourth term as chancellor in next year's election, according to a poll published on Friday.

The "Politbarometer" poll, commissioned by the German broadcaster ZDF, found that 64 percent backed the chancellor's decision, compared to 33 percent who opposed it.

Among registered supporters of the center-right Christian Democratic Union (CDU) party, Merkel's approval rate was as high as 89 percent.

The poll also showed that if the election were held this Sunday, Merkel's conservative Union bloc - the CDU and their Bavarian sister party, the Christian Social Union (CSU) -  would take around 36 percent of the vote, retaining their spot as the leading party. The Social Democratic Party (SPD), by contrast, would only win 21 percent.

Some 51 percent of respondents said they would favor Schulz to be the SPD's candidate for chancellor, compared to 29 percent who said they preferred Gabriel. Among registered SPD supporters, Schulz's approval rating to lead the party into the elections rose to 64 percent, while Gabriel's sank to 27 percent.

However, polls show that Merkel would defeat both prospective SPD candidates to the chancellorship.

The chancellor is elected by secret ballot in Germany's lower house, the Bundestag, by newly elected members following the vote. The precise date for next year's election has yet to be set.

The telephone poll randomly sampled 1,258 voters between November 22 and 24.

The poll also included questions concerning refugees, personal well-being and Turkey's prospective accession to the EU. You can read the full results here.