The daughter of Hitler's war production minister Albert Speer has been honored for the foundation she started to support Jewish women's projects. The former politician used her inheritance to fund it over 20 years ago. 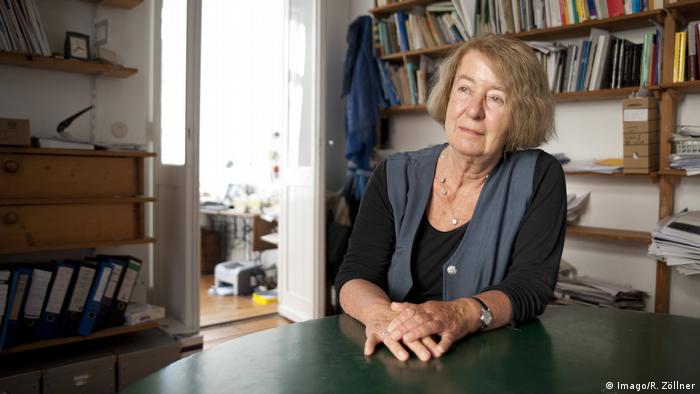 Green party politician and NGO founder Hilde Schramm was granted the German Jewish History Award on Monday. Schramm, 82, is known for being the daughter of a high-ranking Nazi as well as for using money she received from giving back looted art she inherited to finance the creation of her pro-arts non-profit.

Schramm has become renowned for using her political career to help victims of anti-Semitism and Nazi war crimes. As a member and onetime leader of the Green party, she served in Berlin's state parliament for much of the 1980s. In 1994 that body awarded her the Moses Mendelssohn Prize for promoting religious tolerance.

Read more: Jewish history, passed on from tenant to tenant

Since 1996, Schramm's foundation Zurückgeben ("Give Back") has financed 150 artistic and scientific projects led by Jewish women throughout Europe.

Schramm has been well-known for most of her life due to her father, Albert Speer, Hitler's chief architect as well as minister of armaments and war production during World War II. Speer is known as the "Nazi who said sorry," after he apologized for his role in the Nazi war machine during the Nuremberg trials.

He was sentenced to 20 years in prison for his promotion of the use of forced labor. He denied knowledge of the Holocaust, saying he was purposely kept in the dark for purposes of plausible deniability. Historians have pointed out the unlikelihood of these claims, considering that as Hitler's chief architect before the war, he and his team were responsible for construction of concentration camps.

The German Jewish History Awards were founded in 2000 by US entrepreneur Arthur S. Obermayer and his wife, Judith, to honor Germans, typically non-Jews, who make significant contributions to preserving the memory of German-Jewish communities. Other laureates this year received the award for researching Jewish history in their regions.

The awards ceremony in Berlin's parliament was meant to coincide with International Holocaust Remembrance Day on January 27.