Germany's interior minister has defended actions taken against refugees by police in the eastern town of Clausnitz. The incident drew condemnation from politicians and the public. 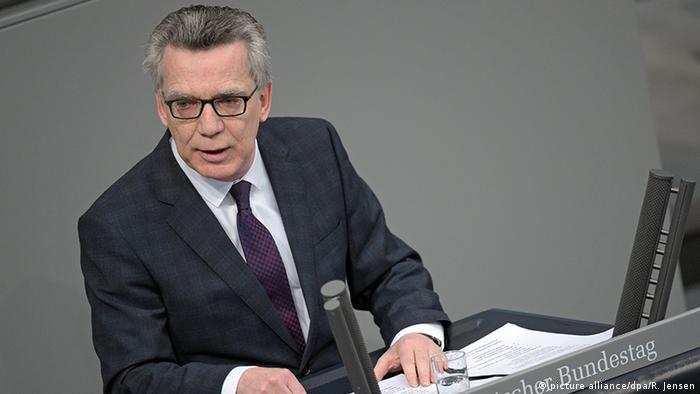 In an interview with German broadcaster ARD, Interior Minister Thomas de Maiziere defended the decision by local police to forcibly drag terrified migrants off a bus in the eastern state of Saxony.

"I can't recognize criticism of this police operation," de Maiziere said in an interview with the show "Bericht aus Berlin."

A video of the incident showed authorities in the town of Clausnitz forcing the refugees - including a 14-year-old boy - out of the bus after a crowd of anti-migrant protestors attempted to block its arrival. The town, located near the Czech border, is home to a new refugee hostel.

De Maiziere said the police were right to quickly get all the migrants off the bus and into a nearby shelter. He told ARD that if the bus had been backed away from the refugee shelter, "these bawling people would have had their way." 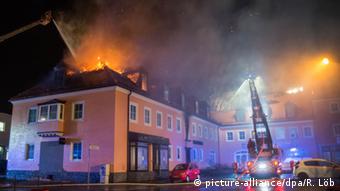 German leaders have condemned attacks targeting refugees, such as an apparent arson attack on this planned refugee shelter in Bautzen

The video drew condemnation from around Germany, though regional police chief Uwe Reissmann defended the actions, saying they were "absolutely necessary" in order to assure the migrants' safety.

De Maiziere echoed the police official's statement, saying the actions were completely in order. Meanwhile, he lashed out at anti-migrant behavior in parts of the country, calling it "unacceptable."

Germany has seen a number of such incidents in recent months, as the country comes to grips with a huge influx of refugees. On Saturday, a fire was set at a former hotel in Bautzen that had been meant to house refugees.

A planned home for asylum applicants has burned down in the Germany state of Saxony. Police reported that onlookers cheered as the building burned and prevented the fire brigade from doing its work. (21.02.2016)

Police in the German state of Saxony are facing demands from opposition politicians to explain their handling of an anti-migrant incident. On Thursday, a mob delayed the arrival of refugees at a new hostel. (20.02.2016)

German officials have condemned a recent video depicting a screaming mob of anti-migrant protesters blocking a bus full of refugees. Another video shows a scared child being dragged off the bus by a police officer. (19.02.2016)

To meet its demands in the construction sector, Balkan state Bosnia and Herzegovina has started recruiting migrant workers from Bangladesh. Many are going with the hope of earning enough to send money back to their families. This video was originally published by infomigrants.net.