The domestic intelligence service has announced an uptick of hundreds in a matter of months. At least one cause of the worrying trend is the ease with which young people can become radicalized online, authorities said. 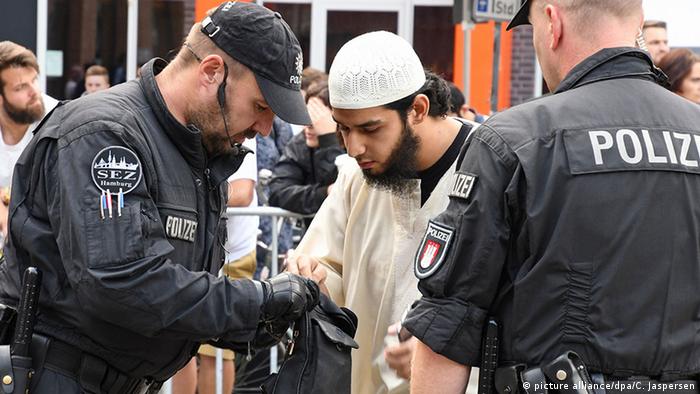 Germany's domestic security and intelligance agency (the BfV) said on Wednesday that the radical Islamist scene in the country had grown considerably, from only about 100 people in 2013 to some 1,600 today. Indeed, according to BfV chief Hans-Georg Maassen, the number had jumped by several hundred in a matter of months.

German domestic spy agency finds Islamist amongst its own

Prosecutors have issued an arrest warrant for the 51-year-old convert to Islam. The former bank employee had been hired to monitor growing extremism in Germany. (29.11.2016)

Police have detained five people on suspicion of forming an "Islamic State" cell in Europe and commissioning terror attacks. The arrests were part of a joint operation by security forces in Germany, Belgium and Spain. (28.09.2016)

"We receive between two and four credible tips on planned terrorist activity in Germany each day," Maassen said. "We have to recognize that we are living in a different situation now than was normal."

The BfV explained that part of the reason for the uptick was the heavy press coverage of terror plots, as well as the increased ease in connecting with extremists online. It also cited an increased danger in young people being radicalized online, saying that then their friends and relatives might not be able to see what is happening.

"These are social groups that find each other, let's say through their mosque community, and the people who see them in the real world don't necessarily notice any change in behavior," according to Maassen.

Of the 1,600 Islamists living in Germany, Maassen said that about 570 of them were considered "dangerous," that is, capable of plotting an a terror attack.

German authorities are constantly trying to stay one step ahead of the Salafists, which has meant banning a particularly controversial translation of the Koran to a series of raids and arrests against suspected attackers.

Anti-terror deployment: Several raids and one detention in Germany