German government distances itself from Schröder after Putin embrace

The German government has distanced itself from former Chancellor Gerhard Schröder after he was caught on camera embracing Russian President Vladimir Putin. This comes at a time of heightened tensions over Ukraine. 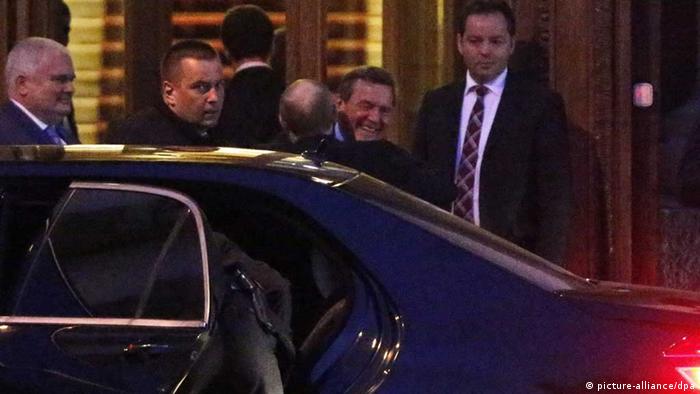 The above photo was reportedly taken as President Putin arrived at Yusupov palace, his official residence in Saint Petersburg, on Monday night, where former Chancellor Schröder was waiting for him. The two men, who are known to be close friends, smiled and embraced before entering the building for what is reported to have been a party to belatedly celebrate Schröder's birthday, who turned 70 on April 7.

Schröder, who served as chancellor between 1998 and 2005, is the head of the shareholders' committee of Nord Stream AG, the company that operates the Nord Stream pipeline that delivers Russian gas to Germany via the Baltic sea. Russia's gas giant Gazprom owns a majority stake in Nord Stream AG.

On Tuesday, the Reuters news agency quoted an unnamed senior official in Berlin who said the government had distanced itself from the former chancellor.

"He does not represent the German government," the official said. "It should be clear to everyone that Mr. Schröder left active politics some time ago."

The publication of the photo came on the same day that the European Union stepped up its sanctions on a number of Russian officials over their alleged roles in stoking tensions in neighboring Ukraine.

US, EU allies agree to 'impose costs' on Russia over Ukraine

The US and four of its European allies have agreed in principle to step up sanctions on Russia over the crisis in Ukraine. They also called on Russia to implement the terms of a recent deal meant to reduce tensions. (25.04.2014)