German gold repatriation ahead of schedule | Business | Economy and finance news from a German perspective | DW | 09.02.2017

German gold repatriation ahead of schedule

Germany's central bank has sped up the process of bringing its gold home from foreign vaults, moving more than 200 tons from New York and Paris in 2016 under a plan devised in the wake of Europe's debt crisis. 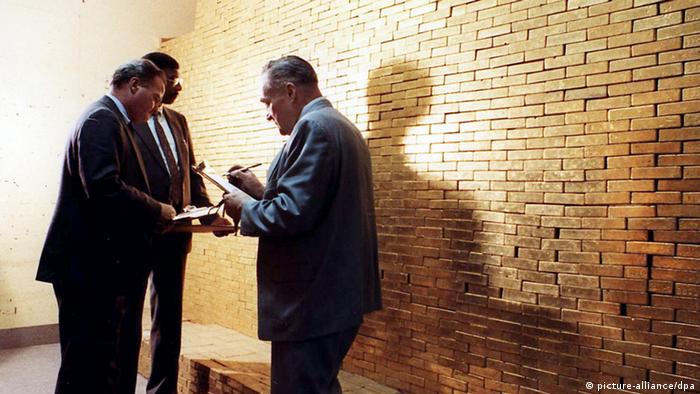 The Bundesbank announced on Thursday that it had relocated some 216 tons of the precious metal to its headquarters in Frankfurt last year, including 111 tons from New York and 105 from Paris.

Until the collapse of the Soviet Union, Germany had kept most of its gold reserves of well over 3,000 tons outside the country for fear they might fall into the hands of the Soviets in the event of a war.

In the aftermath of the 2008 global financial crisis and the 2010 sovereign debt crisis in Europe, another scare emerged that there might be less gold in the foreign vaults than claimed because it had been tinkered with, or that Germany might not be able to retrieve it.

In 2013, the Bundesbank finally launched a relocation program to appease lawmakers and the public who had demanded more transparency about how much gold it held and where.

Originally, the plan called for the majority of the stock to be held in Germany by 2020, including all of the bank's remaining gold in Paris.

Now it seems the Bundesbank will achieve this goal ahead of time because 47.9 percent of the total, or 1,619 tons, were repatriated already by December 2016.

Bundesbank board member Carl-Ludwig Thiele said that all of the 300 tons scheduled to be relocated from New York, for example, were brought back last year.

Nevertheless, New York banks still hold 1,236 tons of German cold compared with 432 tons in London and 91 tons in Paris. Thiele said that the Bundesbank didn't plan any further relocation beyond what had been planned.