Deutsche Telekom has 'flown' in a special guest to showcase its broadband capabilities at the Mobile World Congress in Barcelona. The German telecom giant focused on its activities to advance 5G mobile networking. 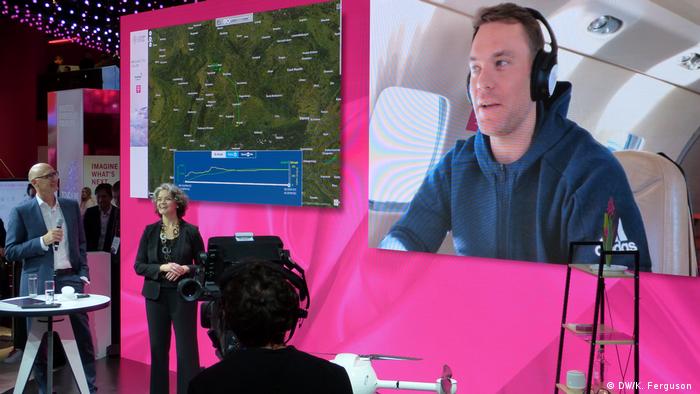 Deutsche Telekom's Head of Innovation Claudia Nemat was just wrapping up her description of the European Aviation Network, a project that allows passengers to use broadband thousands of meters up in the air, when she casually invited CEO Timotheus Höttges up on stage, claiming she had a surprise for him.

Next thing, legendary German goalkeeper Manuel Neuer appeared on the screen behind them.

He was sitting in a plane, live-streaming the Deutsche Telekom press conference.

Neuer grinned and pointed his smartphone out the window at the clouds.

The gimmick concluded a press event that was dedicated to showcasing Deutsche Telekom's advances in 5G, its new voice assistant Magenta (meant, Nemat stressed, as an alternative, not as a replacement to counterparts like Alexa) and a pair of smart glasses that could one day display a checklist for doctors to consult before performing surgery.

As Nemat made her way upstairs for a one-on-one interview with DW afterward, she passed several colleagues on their way to the bar for a celebratory beer.

"I'll be joining you later," she said. The relief that the technology had cooperated to beam Manuel Neuer from an airplane into the halls of the Mobile World Congress in Barcelona was palpable.

Deutsche Telekom isn't just interested in big names for marketing purposes though. When it comes to innovation, especially in the area of 5G mobile networking, Europe's largest telecommunications company has long been looking outward too. Among its major partners is Chinese smartphone maker Huawei, which US officials recently described as a national security risk.

On that issue, Nemat said: "We have very thorough security requirements," adding that she had no grounds for concern about Huawei at present. This echoes a similar sentiment expressed by cybersecurity officials in the UK.

Obstacles yet to be removed

In fact — for now — Deutsche Telekom's ambitions for 5G seem more likely to be curtailed by the German government than by any questions about the integrity of its partners.

While the company has shrugged off concerns that the delay in forming a new coalition government could affect existing plans to roll out 5G, Nemat did make the case for deregulation. Wholesale networks run by governments, she maintained, "put technology at a disadvantage and prevent companies from investing."

But she also stressed that she doesn't necessarily oppose a planned spectrum auction by the German government, as long as the price isn't prohibitive. 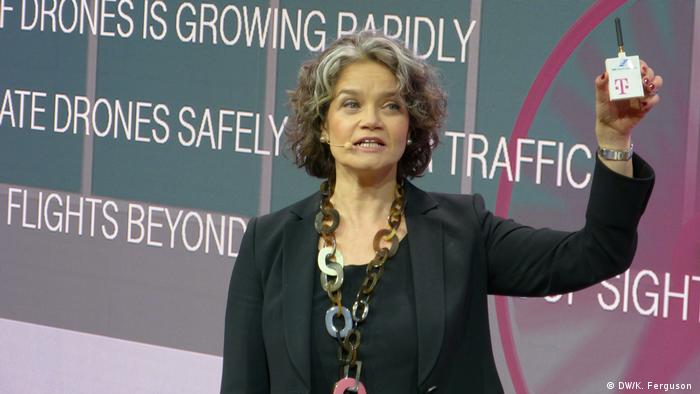 Listening to her speak passionately about her vision of technology driving a revolution in healthcare (she reckons radiologists might be the first medical professionals to have their jobs threatened by machines), and the potential for smart solutions to ease Germany's switch to renewables, one might suspect Nemat of holding an almost evangelical view of technology as a force of good.

But her outlook is more nuanced. "At present, we're slaves to our smartphones," she said.

The antidote to this condition, she believes, lies in education.

"Sixty-five percent of jobs kids will do in the future don't exist yet," Nemat said. "I'm not saying every child has to learn to code … But they must know how a data-driven world works, what an algorithm is and how to spot fake news."

So while the children of today may dream of playing football for their country like Manuel Neuer, or even of driving innovation at a company, like Claudia Nemat, the chances are they will devote their lives to work not yet conceived of.

But the image of Neuer and Nemat communicating — he on a plane and she in the middle of a busy tech conference — is a reminder of the technological feats already achieved, and a taste of those yet to come.

The mobility networks of the future

Deutsche Telekom profit surges on booming home and US markets

Europe's largest mobile operator has seen its net earnings and operating profit rise in 2017. The boost came on the back of its successful US subsidiary and a windfall from US President Donald Trump's tax reform. (22.02.2018)

Mobile World Congress 2018 — no chip off the old block

Next week, tens of thousands of tech enthusiasts will flock to the annual Mobile World Congress in Barcelona to discover the latest gadgets and the companies behind them. Here's a sneak peek at what we can expect. (23.02.2018)