Urns from a crematorium in northern Germany were intended to be used in a burial at sea. But a mishap by a Dutch shipping company meant they washed up on beaches hundreds of miles away from the crematorium. 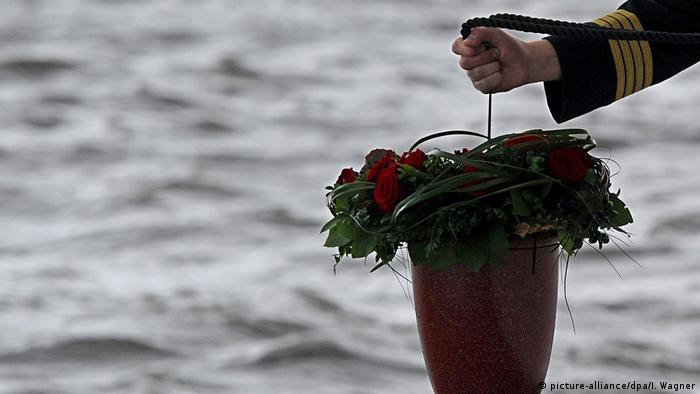 Three urns containing human ashes from a German crematorium were found washed up on beaches in the Netherlands.

One of the urns, intended to be used in an anonymous marine burial, was found by a 14-year-old boy in Noordwijk on the North Sea coast north of The Hague on December 29. The other two urns were found not far from it over the next five days.

The urns carried the names of the deceased and a plaque of the crematorium in the northern German city of Greifswald, 800 kilometers (500 miles) away from Noordwijk.

The Dutch shipping company, Trip Scheepvaart, tasked with scattering the ashes at sea has apologized for the mishap.

Silvia Roos of the shipping firm told Germany's DPA news agency that a wet box holding the urns had slipped over a railing into the sea by accident.

"The incident is very unpleasant for us," Roos said, adding that the company was considering how to apologize to the relatives of the deceased.

The firm has since scattered the ashes stored in two other urns and was planning to do the same with the third urn.

Unlike the Netherlands, where scattering a person's ashes in the sea is legal, Germany allows sea burials only in biodegradable urns. Some urns are weighted down to make sure they sink and eventually dissolve within a few days.

Sea burials offered by Dutch shipping companies are also much cheaper, the German daily Ostsee-Zeitung said. A sea burial in the German state of Mecklenburg-Western Pomerania, where Greifswald is located, usually costs more than €1,200 ($1,360). Dutch shipping firms do the job for as little as €400, the newspaper said.

Public prosecutors in the northern German city of Stralsund are looking into the incident to ascertain if the shipping company had committed a crime, such as desecration of the dead.

From mandatory coffins to the time-honored "corpse snack," Germany has an array of burial laws, funeral traditions and customs through which nearly one million people pass through each year en route to the afterlife. (31.10.2018)

More and more Germans these days prefer to be buried at sea, media reports quote the Federal Association of German Undertakers as saying. The "Bundesverband Deutscher Bestatter" is trying to determine the exact number. (10.03.2018)